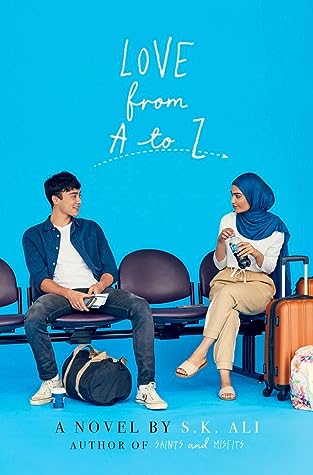 This book made me shed a tear, and while that may not exactly sound like an impressive feat, you should know that I am an individual who guards their tears as jealously as a dragon guards its hoard. When I first heard about LOVE FROM A TO Z, I was so excited - I was ready to love it for that adoring glance between the hero and heroine on the cover, the hijabi rep, and of course, the promise of a love story unfolding abroad. How romantic.

But I was also afraid - afraid that it would be too twee, afraid of being burned yet again on a young adult book that was diverse, but didn't really do anything with that diversity. I was wrong on both counts. LOVE FROM A TO Z tricks you into thinking it might be annoyingly precious in the beginning, only to begin a deep-dive into two very different teenagers' lives, and the very real problems affecting them as they slowly but surely fall in love.

Zayneb is a Muslim girl of Pakistani and Caribbean descent. After going head to head with her extremely Islamophobic social studies teacher, she is sent to Qatar to visit her aunt to cool down. On the plane ride over, she is seated next to an Islamophobic woman, whose loud protest at being seated next to Zayneb is rewarded by a move to first class. It isn't all bad, though - she has an empty seat to herself, now, and a cute boy on the plane smiles at her.

The boy is named Adam, and he is of Finnish and Chinese descent. He is also Muslim, but he converted as a teenager because of his father's conversion and finding of peace through his new religion. He thinks the hijabi girl at the airport is cute - but what really draws her to him is her journal, which he sees when it spills out of her bag. It's called "The Marvels of Creation and the Oddities of Existence," just like his, which is named after an Arabic work of the same name, ʿAjā'ib al-makhlūqāt wa gharā'ib al-mawjūdāt (عجائب المخلوقات وغرائب الموجودات).

As they get to know each other more, they like each other more. Zayneb starts hanging out with Adam's friends from the international school, who are diverse and trendy, while checking in with her friends back home, who are launching a resistance group against their teacher and trying to find a way to link him solidly to his racist anti-Muslim posts online. Her frustration and powerlessness culminate after a series of new racist incidents, and finding out the truth of her grandmother's death.

Adam, meanwhile, is suffering in silence because he's just been diagnosed with MS - the same disease that killed his mother. He wants to tell his father but is afraid to, because his mother's passing almost broke him and he isn't sure his father is strong enough to sustain another devastating blow. My heart broke for him as he bore this heavy burden alone and tried to keep everyone at a distance to avoid them being hurt, not realizing that the distance and apparent coldness hurt them even more.

This is such a good book. There are moments where I did lift my eyebrows a bit, but every time the book seemed like it was going to become too cutesy, it threw another hardcore Truth Sandwich my way. This is a love story, but it's paved with pain and angst. One of the moments that made me cry, for example, is one of Adam's flashbacks of his mother, and her starting to cry because she's realizing that she will never live long enough to see him grow older. There must have been some serious onion-chopping going on that I wasn't aware of, because when I read that passage, my eyes became a veritable water park. Replete with slip n' slide action.

I honestly can't impress upon you how much this book surprised me, and in such a good way. I was rooting for both characters the whole time, willing them to overcome their struggles. It didn't just made me cry, it also made me laugh a couple times, and the ending made me put down the book and sigh a little in satisfaction like, "Whew, that was a job well done." Exactly how a book should make you feel once you've finished it, basically. (Even if it did tear at the corners of your soul.)