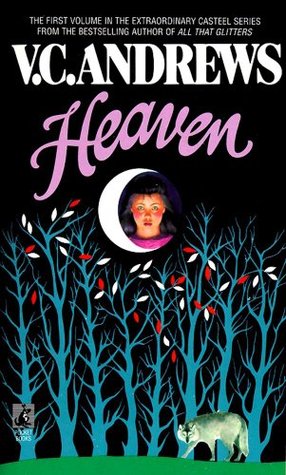 The Casteel series was the last of the family sagas that V.C. Andrews had a hand in before she died and her ghostwriter took over. It's impossible not to compare it to the Dollanganger series, especially since both approximate what you'd get if you decided to adapt a bodice-ripper for the not-so-discerning young-adult audience. On a scale of one to trash, this ranks a solid Bertrice Small: the writing is just as melodramatic, and Andrews regularly and predictably makes out parental figures to be abusive the same way that Small could be counted on to make all of her villains libertines and deviants.

HEAVEN is about a young girl named Heaven Leigh (get it?) Casteel. She lives in the hills, cramped in a small shed with her four other siblings, grandparents, father, and stepmother. She is the only child from her father's first marriage; her mother died in childbirth, and her father kept her on a pedestal in his mind. No other woman can match up, not even his daughters or his new wife, so he mostly ignores his children, abuses his wife, and is a regular attendee of the local "den of ill repute" despite the fact that they're all starving.

Heaven catches the eye of a rich boy because of her beauty, and this is a trope of Andrews's, too: there's always a soft and sensitive boy hero figure to whisk the heroine away from her wretched life-- until he proves to be just as disturbing as everyone else, only better at hiding it. Logan doesn't have a chance to show off any true colors he might have, though, as Heaven's father gets an STD, and kind of loses it after his wife has a deformed stillborn child; he gets the brilliant idea that the solution to their money problems is to sell off his children for $500/ea. to local rich people in the area.

Heaven gets sent off to live with a woman named Kitty, but her nickname could be "Mommie Dearest." She lives in a house filled with creepy ceramic animals and everything is pink. She has violent mood swings, and living in Casa de Crazy, you could find yourself having your hair lovingly combed out one minute, only to be thrown into a scalding hot Lysol bath the next (note: pretty sure this Lysol name-drop in the book was #notsponsored). Her only solace in this house is Kitty's young husband, Cal, but his feelings towards Heaven-- as you would expect-- aren't exactly pure.

HEAVEN was a good book-- and by a good book I mean it told a good story, even though the writing was arguably not good. It reminded me a lot of the stories I used to read on FictionPress back in the day, with its long laundry list of soap opera plot devices, and the fact that virtually every character in this book except for the good ones were villains. I hated Kitty, and I also hated Heaven's siblings, especially Fanny and "Our Jane." Tom was also creepy, and he and Heaven definitely had a "Flowers in the Attic" vibe going on, and I'm worried about what might happen with their relationship in the next book. Logan will be back, I'm sure, but whether he stays nice and heroic is anyone's guess.

If you're into bodice-rippers and vintage sleaze, I really can't urge you strongly enough to pick up V.C. Andrews's books. There is nothing quite like them, and you can take that how you like.