An Affair of Poisons by Addie Thorley 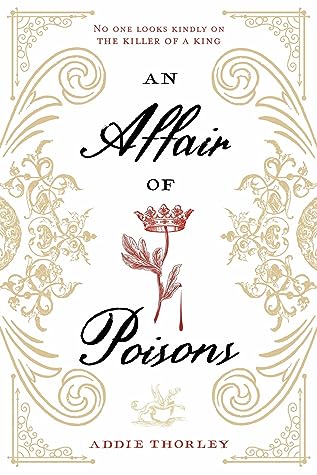 The "Affair of the Poisons" was an actual historical event in 17th century France, in which many members of the nobility purchased poisons and other illicit services from a woman named La Voisin, and other mystics and alchemists, to "take care of people" who served as an impediment to their ambitions. Hundreds of people were implicated and it understandably caused a lot of fear and paranoia. If you've heard of this and aren't sure why, it was mentioned in Versailles. That was how I first learned about it, watching the TV show with my mom.

AN AFFAIR OF POISONS takes that event and runs with it, spinning it out into a tale of historical fantasy with real alchemy and magical poisons. There are two narrators: Mirabelle is the daughter of La Voisin and a powerful alchemist. She aids and abets her mother and her sorcerer lover, Legrange, who are both part of the Shadow Society working to overthrow the nobility. She inadvertently starts a violent revolution when her mother uses one of her poisons to murder the king of France. Josse is the bastard son of the king and lives in the shadow of his favored older brother, Louis. His father's murder fills him with angst over the lack of closure, and the determination to protect what remains of his family from revolution.

When our characters meet at first, they do not like each other very much. Mirabelle has been taught her whole life that the Shadow Society are helping the commoners escape from the yoke of noble rule. And Josse has her society to blame for the murder of his father and the persecution of his siblings. However, La Voisin has lost sight of her original mission and soon proves to be utterly corrupt with power, willing to do whatever it takes to secure her foothold in the control of France, even if it means using the people she originally sought to protect as pawns.

I really enjoyed AN AFFAIR OF POISONS and I'm honestly surprised it doesn't have more reviews or buzz. First, it's a standalone in a genre being overrun by multi-book cash cows. When was the last time you saw a young adult fantasy novel that wasn't at least three books long? Second, Mirabelle is a strong female character and Josse is a flawed hero who doesn't act like an abusive creep. Both of them have a lot of character development over the course of this book, and make mistakes with grievous consequences. There is a lot at stake, and the author isn't afraid to show that. Third, it's a fantasy reimagining of Revolutionary France, and if you took one thing away from my review of Paula Volsky's ILLUSION, it should be that that is a concept I'm all over like white on rice.

AN AFFAIR OF POISONS is a good book and if you're tired of books like THRONE OF GLASS and the like, you should pick this up and also read up on The Affair of the Poisons while you're at it.