Shoot the Messenger by Pippa DaCosta 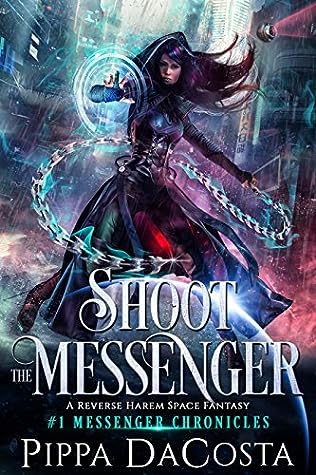 SHOOT THE MESSENGER is like a crate box of all the tropes I adore in fiction - strong female heroines, sexy but utterly depraved villains, hot guys, space opera elements, faeries, court intrigue, and espionage. Like a crate box, all of these great things come wrapped in amazing packaging. Take a moment, please, to appreciate that beautiful cover and the imposing-looking woman wielding the magic whip. That's our heroine, Kesh.

The story is a bit difficult to explain because it's so complicated. It takes place in a world that's super high tech but magic also exists here, too. Humans were originally created to be the playthings of the fae, but then they rebelled - as humanity is wont to do - and created technology (or, "tek") to repel them. Now, the faeries are angry and want to put humanity back in their place.

Kesh is a messenger who runs her delivers through the unsavory parts of town, and she ends up getting involved in the fae vs. human situation against her will when a job goes bad. It's not a great job, but it becomes worse when one of her messages ends up killing someone. Worse, she's a witness, and someone witnesses her being a witness, and a bounty goes on her head. Then an evil fae kidnaps her robot, because the robot has dangerous footage, and when she goes to retrieve it, she ends up heading straight into a deadly plan to facilitate the return of the fae and their prince - one that she wants to prevent, at all costs.

This is a reverse-harem romance, so it has two male love interests. One is Kellee, who is a sort of policeman. The other is Talen, a faerie with his figurative claws cut. Both of them end up aiding her against her fight with Eladen, a truly evil fae, and one of the best villains I've encountered in fiction in a while. Seriously, this dude is SCARY. What he does to the heroine is absolutely terrifying, and about fifty different kinds of messed-up. He's also hot and messed-up, which doesn't help matters.

--Especially not me, with my questionable attraction to such characters. #Yikes

Reading this gave me strong anime vibes, and I kept thinking about other surreal and dystopian shows I've watched, like Metropolis, Ghost in the Shell, or Aeon Flux. The action and fight scenes in this book are so well done, and I really think that this would translate well to the screen if the author ever becomes big enough where that's a viable option (I hope so). It's funny, because I'd read one of this author's other books, BEYOND THE VEIL, and while I couldn't really get into it, I did like the author's ability to write and characterize and said in my review that I'd check out her other works. Well, I kept my word, and man, has this author grown up. She's improved her craft so much, and this book is leaps and bounds better than her debut. I'm so impressed. Maraya, you were so right.