The Shanghai Free Taxi: Journeys with the Hustlers and Rebels of the New China by Frank Langfitt 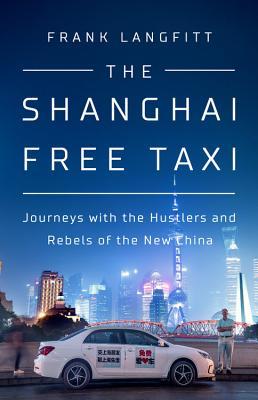 Last year, I read a book-- with a similar cover to this book-- called YOUNG CHINA by Zak Dychtwald, which was all about Chinese millennials and how they go about their day-to-day lives in a country that is changing so fast, economically and culturally, that people seem to scarcely have the ability to keep up. THE SHANGHAI FREE TAXI seemed like a great book to compare it with. Both books are written from outsiders (American white dudes) coming to China as "impartial" observers noting down some of the cultural quirks of what it means to be Chinese, and the changes the country has undergone as it becomes an economic force to be reckoned with while still clinging to old traditions.

Dychtwald interviewed young Chinese people, who proved to be slightly more forthcoming than the older generations in his experience. Langfitt has a different technique to get people talking: in China, he started a "free taxi" service, where he would offer people rides in exchange for the telling of their personal stories. It sounds like a super shady deal, and I'm sure Langfitt received a lot of "nos," but amazingly, he got "yesses" too-- and those "yesses" lay the groundwork for the fascinating essays in THE SHANGHAI FREE TAXI. Thank goodness for those game individuals who are willing to take a chance, am I right?

One thing to keep in mind: we're all prisoners of our unique cultural perspective. An outsider viewing China will never truly understand what it's like to live and grow up in the culture of that country. It's hard to resist the urge to impress our own cultural understandings and societal mores on others when observing people who are different than us. To his credit, Langfit-- as Dychtwald did-- tries to be a passive observer who speculates while trying not to judge, and he is an NPR correspondent, so being a professional observer is his job. Still, there were still a couple points where I felt like Langfitt was letting his own personal views color his observations-- one passage, in particular, seemed to be implying that religion is necessary for or else a critical part of morality.

Nitpicking aside, I really liked the stories that Langfitt chose to showcase in this collection. Some are funny, like the story of the man named, incredibly, "Beer." Beer is a used car salesman and an incredibly sleazy one, who will stop at no tactic to sell cars, be it dramatics or scamming. Some are sad, like the story of Crystal, a successful Chinese woman who moved to America but returns back to China to look for her missing sister, Winnie. As Langfitt and Crystal investigate, things quickly turn ugly, as they find out Winnie was running a long con and may have gotten mixed up with some dangerous people. Some stories are terrifying, like Johanna, the human rights lawyer and activist, who takes Langfitt to "black jails," or prisons that are off the books and often hidden in plain sight. The ones she showed him were disguised to look like vacation cottages in the middle of a park. And there are stories that are sweet, like the young professional who invites Langfitt to a wedding, or the hair cutter, Max, who trims the hair of people who are housebound-- all free of charge.

If THE SHANGHAI FREE TAXI succeeds wildly at one thing, it's at showing that all countries have nuances. There are good and bad elements to every nation, as well as the people who live in them, and you really cannot get the measure of a place from hearsay or singular examples. SHANGHAI FREE TAXI is still a series of case studies, but it works hard to show China in many different lights in as unbiased a way as possible given the circumstances of the observer and the subjects. If you enjoy travel memoirs and learning about different and unfamiliar places, THE SHANGHAI FREE TAXI is a great book to pick up, especially if you enjoy the works of J. Maarten Troost.