The Beauty of the Moment by Tanaz Bhathena 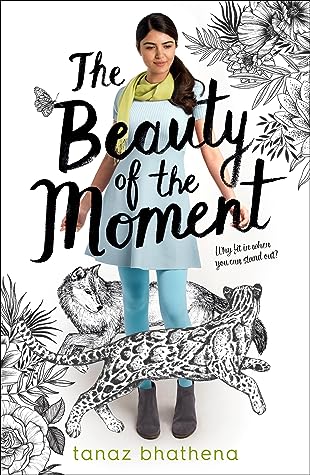 I wanted to read this book because I loved her debut novel, A GIRL LIKE THAT. I didn't care that this book would be completely different in tone (cute instead of soul-destroying) and setting (Canada instead of Saudi Arabia); she had won me over with a brilliant and powerful effort, and I was eager to get my hands on anything else this woman wrote.

Susan is the new girl at her Canadian high school, having just transferred from a fancy academy in Saudi Arabia. She seems focused and driven, but her life is actually in shambles. Her parents seem to be on the verge of separating (Dad didn't join them in Canada and he's having an affair), and her mother is channeling her frustrations through her daughter's accomplishments. All Susan wants to do is go to art school and learn to refine her talents, but her parents say that's a hard no.

Malcolm, on the other hand, is the residential bad boy. His life is also a mess, but not the romantic kind that makes the girls intrigued. He's struggling in school, he's never gotten over his mother's death, and his father is physically abusive. His love life sucks, too. His ex-girlfriend used him to pit against other men for her enjoyment, and now that they're apart, she wants him back.

The good girl/bad boy trope has been done to death, but I've never seen it done with Indian Zoroastrian rep before, so props there for showing me something I haven't seen before and incorporating that diversity into the storyline rather than reverting to name-dropped tokenism. I also liked how Susan was introverted and the author didn't try to make her out to be super quirky or special because of that. One of the moments I really related to was her anxiety about driving; driving can be so stressful when you have anxiety because of the perceived lack of control. This was one of the best portrayals of an introvert in YA I have encountered in a while, and I really liked that.

The food descriptions in this book are fantastic, and while religion and morality doesn't play the same role here as it did in A GIRL LIKE THAT, it is mentioned several times as a focus in their lives. The kids act like kids, and not like adults writing as kids - I liked that, too. There were a lot of things I liked about this book, to be honest, but I'm not giving this a higher rating because the storyline just didn't catch me and I wasn't engaged the way I would have liked to have been. I've also just read another book called LOVE FROM A TO Z that did the new girl/star-crossed lovers with an HEA bit better, and while THE BEAUTY OF THE BOOK certainly isn't a bad book, it couldn't quite meet my expectations, either. It almost feels like this was the debut effort, not A GIRL LIKE THAT.