The Fountains of Silence by Ruta Sepetys 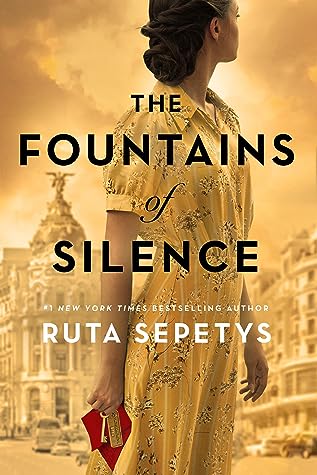 A while back, I read another book called Ruta Sepetys, called OUT OF THE EASY, a work of young adult historical fiction set in 1950s New Orleans. It had the potential to be an interesting book, but the lazy, meandering pace; lack of action; and reliance on an almost entirely character-driven story made for some tough readin'. I hoped that THE FOUNTAINS OF SILENCE, with its intriguing premise of characters struggling to exist under the militaristic dictatorship of Francisco Franco in Spain might be better. At the very least, it might be more action-packed.

I was wrong, on both counts.

The slow pacing and character-driven stories seem to be hallmarks of Ruta Sepetys's style, regardless of whether she's writing for an adult or a young adult audience. And even when writing about "edgy" content, like prostitution or stolen babies, her books have an overly clean, sanitized feel reminiscent of Amy Harmon's - only, she isn't the emotional storyteller that Harmon is. It's like these books were put in a juicer and everything pulpy and interesting was extracted, leaving only the inoffensive concentrate behind.

There are multiple POVs in this book - another literary technique I'm also not a fan of, which wasn't present in OUT OF THE EASY - which made this book hard to read. One of the advance readers I saw actually ended up not finishing this book because of that, and I'll be honest and admit that I considered doing the same because this book took so long to get into. Daniel is the main character, I would say, even though it takes a while to get to him. His mother is Spanish, but his father is a Texas oil baron, and he's in Spain because his dad's trying to secure a drilling deal with Franco. The other main character, the love interest, is a girl named Ana, who works in the high class hotel, the Castellana Hilton, at which Daniel and his family are staying.

Ana's family also gets POVs, primarily her brother, Rafa(el), who wants to be a bullfighter; her married sister, Julia, whose fear at challenging the system makes her more willing to play by the rules; and then Ana's cousin, Puri, who works at a Catholic adoption center with the nuns and is beginning to discover something sinister about the babies being brought into their charge. Their stories intertwine, sometimes in dull ways, sometimes in interesting ways, sometimes in irrelevant ways that feel like they're only there to bulk up the page count. Ana learns desire and rebellion; Daniel learns to confront his own privilege; there's a love story that bends and twists under pressure and strife, but doesn't break; all of this is happening under a fascist yoke, where the Guardia Civil are everywhere, and so are their plants, slowing down the inevitable influence of Western capitalism.

I ended up liking this a bit more at the end than I did at the beginning, and obviously, since I made it to the end of this nearly-500-page tome, I ended up feeling invested enough to finish. It was an OK story, but again - it felt sanitized. History is dirty and awful. I didn't really feel like the fear, paranoia, and persecution of the dictatorship was adequately captured here. Even when bad things do happen, they come across as understated. You, as the reader, are utterly numb to the stakes. It's the type of book you might encounter at a book club or bring with you on an airplane, only to leave it behind you on the seat once you've finished. I don't think this is a bad book, but it's definitely not what I want out of historical fiction, and it's cemented my suspicions that Ruta Sepetys is not an author for me.