The Beautiful by Renee Ahdieh 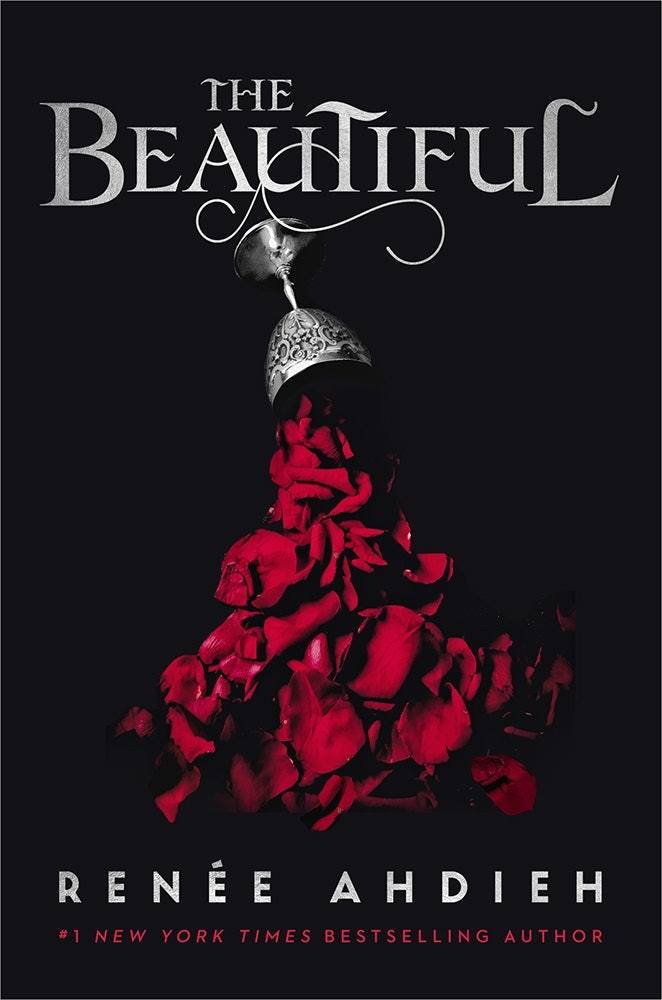 When this book was announced, everyone was like, "Woohoo! Vampires are back!" And I was sitting there in the corner, swathed in black and clutching a glass of wine, thinking to myself, "Fools! For some of us, vampires never left." You see, I love vampire stories and always have. For many, TWILIGHT was the "gateway book" into vampire fiction, but I'd been reading L.J. Smith's Night World and Bram Stoker's Dracula and Amelia Atwater-Rhodes's Den of Shadows years before it came out; Lost Boys was my favorite movie, and I was trying (but failing) to cultivate Anne Rice, as I much-preferred the chunkier books of Chelsea Quinn Yarbro with their dense historic montages, and entire paragraphs that are odes to food and fashion as written by someone with a deep and undying passion for history. So, in short, I freaking love vampires. I want you to keep that in mind, that this review is being written by someone who is obsessed and has been for a while. It is important.

THE BEAUTIFUL is about a girl named Celine who lives in a convent with a bunch of other girls in 19th century New Orleans. A beautiful terror is stalking the city, killing innocent girls. Celine is laboring under a "dark" secret that she must keep hidden at all costs. There's a secret society of beautiful people who are more than they seem. Everything is beautiful, even death-- because for some, it is not the end. *evil laughter*

(Seriously, why haven't I been hired on as a blurb-writer, yet?)

I don't want to go too deep in to the plot for spoilers' sake, but there's a love triangle between a mysterious, possibly supernatural boy and a police officer. The "attraction" between both is suspect, as Celine goes from hating both these boys to finding them charming basically overnight. There's a secret society that ends up welcoming Celine and she finds herself the obsession of a depraved and self-absorbed evil guy who likes to wax on and on about how powerful and artistic he is in his first person interludes, which had me rolling my eyes a little. Not much happens-- there's fancy dresses and some murders, but between that there's a whole lot of nothing and Celine's "dark secret" is actually kind of horrible (and not in a good way), and I honestly don't understand why it was such a big deal or why she felt so guilty about it. Celine is such a passive heroine and I really didn't like her.

Oh-- and the book with no resolution. Because there's a sequel.

Here's my person issue with Renee Ahdieh: all of her book summaries sound amazing. She writes books that, without picking them up and going only by the summary, sound exactly like the types of books I want to read. A retelling of Arabian Nights? YES. A retelling of the Ballad of Mulan? YES. A vampire story set in New Orleans and laced with Gothic elements? YES YES YES. But then I pick them up, and each time, like Boo Boo the fool from Yogi Bear, I end up finding myself betrayed all over again as I encounter not awesomeness, but very empty, pretty writing that is too busy being mired in its own overwrought nature to move the plot along; cardboard characters; and plots that literally take 400+ pages to accomplish what could have been done in 250. WHY.

The biggest problem that I personally have with THE BEAUTIFUL is that it is a conglomeration of elements that appear to be borrowed or inspired by vampire stories that already did it better, and it still isn't a good book. The hero's name, for example, is Bastien Saint Germain and I did wonder if that was taken from or inspired by the alchemist, Count of St. Germain, especially since Sebastian's uncle is actually a count. He was a fascinating historical figure who made all sorts of weird claims, like that he was actually 500 years old. You might think that would make him ripe for being incorporated into a vampire myth, and you would be right, only Chelsea Quinn Yarbro-- that author I mentioned earlier-- actually already did that, with her Saint-Germain series.

The concept of angsty and flamboyant vampires living it up in New Orleans is also not new or novel, as that was done by Anne Rice with her Vampire Chronicles series-- which then set the mode for ceaseless imitations and fanfic (despite Rice's "no fanfic" policy), especially in the 2000s, when Interview with a Vampire was made into a movie with Brad Pitt and Tom Cruise, and everyone suddenly decided that a vampire was a nobody unless he or she spoke with a French accent and wore a ruffled and very expensive cravat. Another similarity is that Anne Rice's hero is named "Lestat de Lioncourt" and the paranormal entourage Celine encounters in THE BEAUTIFUL is called "The Court of Lions."

You also can't look at that cover and tell me that it isn't trying-- either actively or subconsciously-- to capitalize on the nostalgia and the branding of the TWILIGHT books. The black/white/red color scheme, the font choices, and the central photograph set against the black cover are all very reminiscent of the Twilight series' cover art, as well as several paranormal copycats that rose to prominence at the peak of the YA paranormal craze.

To clarify, I'm not rating low because of these similarities, but because if the author was reading and researching into all these different worlds to write her own vampire book and still managed to write something that was mediocre and uninspired, that is 100% on her. What I think Renee Ahdieh was trying to do was to write a book that would appeal not just to her YA audience, but also to vampire fans who would notice all of these vampire references and clap their hands in excitement at each bat-winged Easter egg. That, if that is what she was trying to do, is not a bad tactic in principle and it really could have worked if this book had actually been what I, as a vampire fan, look for in fiction.

I have no problem with books that were inspired by something else and have Easter eggs and clever winks and nods to their original sources if they do a good job and pay proper homage to what they're inspired by. That technique was precisely what made READY PLAYER ONE so popular. It was greater than the sum of its parts, but each individual part was also special on its own. Authors also should read, and actively, in the genres they want to write because it teaches them not just what they should do, but also what they shouldn't do. I've read books that were clearly inspired by other books but managed to do them better, case in point: Pippa DaCosta's Messenger Chronicles, clearly inspired by the paranormal science-fiction books of the 1960s and 70s, only with a strong female protagonist instead of an outmoded white guy with questionable morality.

No, I'm rating low because this could have been the READY PLAYER ONE for vampire lovers, and it ended up being a tired, washed out imitation. That's a crying shame.

If you are new to vampire fiction or like Renee Ahdieh's, um, unique writing style, then you will probably really enjoy this book. She has a pretty devoted fanbase and must be doing something right, even if I personally can't appreciate it. But if you are a veteran of books in the vampire genre and were hoping for something new or homage-worthy, or have been burned by Ahdieh's books in the past as I was and hoping that maybe she'd changed her tune, you should probably save yourself the disappointment and avoid this book.