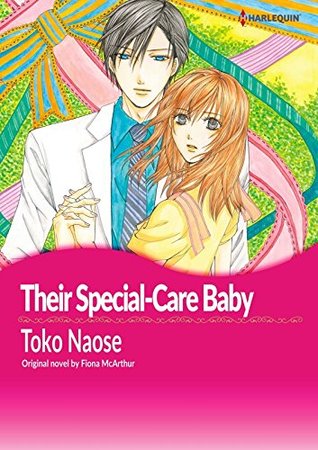 Some of these Harlequin romances have the most eye-roll worthy titles, and THEIR SPECIAL-CARE BABY is no exception. Even though it was almost 99-cents, I almost didn't buy it, because the title was so ridiculous. I loved that cover art, though-- just look at those soft, crayon-like colors. How could I resist? Plus, the summary for this book was too enticing to pass up: doctor love interest, amnesia, estranged brothers. Oh yes.

To my happy surprise, this was actually an incredibly serious effort and-- unlike some Harlequin manga I have read-- the art inside the book is just as good as what's on the cover. The plot is also good, too. Desiree was in a terrible train accident, covered in blood. When Dr. Stewart, the first responder, arrives on the scene, he is struck by the sight of Desiree, heavily pregnant and clutching another baby, with her will for the two of them to survive burning bright in her eyes.

Desiree is able to make a full recovery but she has amnesia. Stewart tells her that she was identified as Desiree Kramer, the wife of his estranged brother who he was going to meet for the first time. Her baby is named Sophie, and the baby she was pregnant with, Simone, is currently in the NICU. As if that weren't enough bad news to swallow, Stewart tells her that her husband, Sean, is dead-- he died in a car wreck.

Desiree comes to stay with Stewart, his mother, and his mother's caregiver. They all really like Desiree because she's quiet and cheerful and caring, but Desiree is haunted by the thought that something is wrong-- not just with her, but also with Sophie. Even as she finds herself becoming attracted to Stewart, and he to her, Desiree must come to terms with the secrets revealed by her gradually-returning memory, and Stewart with his enmity with his now-deceased brother.

This is a quiet book-- the romance in it sneaks up on you, but in a pleasant way. Desiree is such a calm heroine, and much more mature than most heroines I encounter in these romances. Stewart is a beta hero who is devoted and loving. He never treats the heroine ill or condescends to her. Their romance flows very naturally and feels believable. Why wouldn't two nice people fall in love? Even though it happened fast, I didn't question it-- it made sense, because they were both so decent.

If you, like me, were put off by the silly title, don't be. I actually enjoyed this romance quite a bit.Toko Naose is a new mangaka to me, but she's one I'm going to keep an eye out for-- I really enjoyed her careful adaptation of this work, and her art style is absolutely gorgeous.