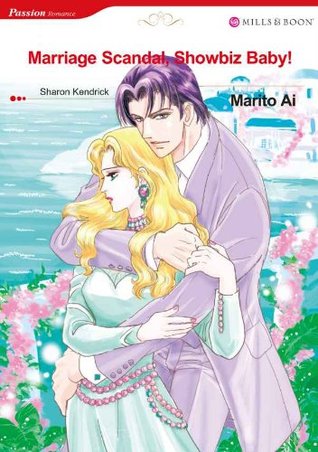 Marito Ai is one of my favorite Harlequin manga artists. I will read literally a n y t h i n g she's worked on, even if it has a silly title like this one does. I don't know how much control these mangaka have over which manga they decide to adapt, but Ai has only worked on really good ones, many of which are super emotional and unfailingly tug at my heart.

This is a second chance romance between an actor and an actress named Matteo and Jennifer. He met her when she was doing Shakespeare plays as an amateur and fell in love with her because of her ingenue-like innocence and wonder. As the two of them became more famous and busy, she got jaded and distant, and in a moment of weakness, Matteo ended up having an affair with another young woman at the beginning of her career.

They meet again at the premier of one of their movies and when they're stuck in a stalled elevator, all of that past history catches up with them and they "do it." Unfortunately, Jennifer ends up pregnant from the encounter, and Matteo wants to be involved, which ends up forcing both of them to confront all of the hurts and miscommunications that had built up over their faltering marriage.

Obviously, the cheating is going to be a sour note for a lot of people. I'm not too fond of it as a plotline myself, but I did like the message in this story about how human beings can make mistakes but still love each other, and how physical intimacy exists on a different plane from emotional intimacy. Sometimes, these manga end up feeling like throwaway reads, but this one hit me deep inside and almost made me cry at one point. All of the manga Ai has worked on have done this. She's so good at translating romance novels to a more visual medium.

If you're new to the world of Harlequin manga adaptations, start with Marito Ai.