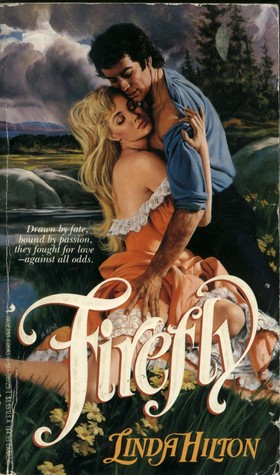 Don't be fooled by that cover. Even though this book and everything about it screams "bodice-ripper!" this is a tender, angsty romance between two broken people and their ultimate triumph over those who are determined to keep them apart. Set in 19th century Arizona, back when it was a "Territory" and not a state, we're treated to the hellish heat and hard-grit lives of those who live on the frontier.

Julie, our heroine, is a tall, gangly bespectacled woman who lives with her parents and young brother while they work her literally down to the bone. They eat all the food she cooks while she's waiting on them, so there's scarcely enough left for her after all that back-breaking labor. Her mother is confined to her bed and has Julie wait on her all the time like a spoiled cat. And her father hates her for reasons we don't know, and seems eager to revel in her suffering.

Del, our hero, is a man who hasn't gotten over the death of his beloved wife. He used to be a doctor but alcoholism took that away, as it also took away his ability to be with women or even function normally. When the heroine meets him, he's unshaven, wearing old clothes, and has a bad case of BO. Not really the makings of a romantic hero, I think you'll agree.

Julie ends up having to seek his help when her mother breaks an arm because the real doctor is out, and then another injury-- her brother gets a fishhook caught above his eye-- results in another Del encounter when the doctor turns out to be a major, child-hating ass. Nobody is really all that sorry when the doctor dies, leaving Del the only capable man in town. Particularly Julie, who is angered by his squandering of his talent and agrees to help him get back on his feet again.

Oh my GOD, the feels this book gave me. First, as much as I enjoy the backwards, heteronormative romance novels of yore (and even of today, in some cases), it is SO refreshing to see a hero who struggles with his masculinity and has real vulnerabilities (impotence and alcoholism and PTSD). I mean, the man literally saw his wife shot before his eyes. That would fuck anyone up. And Julie-- God, how I hated her family for treating her the way they did. When you find out her backstory, you just want to take the poor girl in your arms and hug her forever while promising her everything. (Luckily she has Del to do that for her-- or does she?? Hehehe...)

The medical scenes were gnarly. The villains were truly villainous. The romance is slow burn. The heroine is scrappy and competent but also vulnerable and broken-- and so is the hero. There are SO MANY moments in this book where I just wanted to slap them over the heads because of all the misunderstandings but in this book, it actually works. Both of them have self-esteem that's lower than dirt because of what happened to them, so whereas 99% of books have me rolling my eyes over the misunderstandings in question, here, though frustrating, it actually made sense.

I'm honestly surprised this book isn't more popular than it is. The ratings for it are pretty abysmal and I'm shocked by that because it is smartly written, and completely unique. I don't think I've ever read another romance quite like this one-- I could see it playing out like a movie in my head, the scenes are so vivid. Mandatory disclaimer is that I was friends with this author back when she was still on GR and I stalk her on Twitter (but I stalk everyone on Twitter-- hit me up with your username and tell me who you are from Goodreads, and I'll stalk you, too). We haven't talked in years, though, and I just happened to think of her while looking up old books on Kindle Unlimited and seeing the name.

I honestly can't wait to read more from this author since I loved this one so much. Even the title, once you realize the reason behind it, is probably going to make you cry.