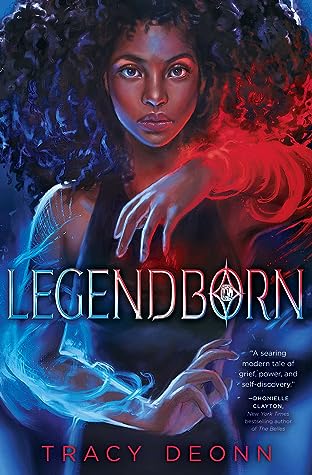 Some of my friends were saying that this is like The Mortal Instruments, and while I can kind of see what they mean, I also think that LEGENDBORN is a much better book. Clary and Jace were such immature little shits, whereas all of the characters in LEGENDBORN-- even if they aren't nice-- have nuance. Plus, the heroine, Bree, is just really fascinating. She is unlike a lot of heroines I've read in YA. She's allowed to have sexual agency. She knows when she looks good. She gets mad and calls people out when she should. She doesn't cower. She's a bona fide bad-ass. But she also has moments when she feels vulnerable and weak. In short, she behaves more like a teen and less like an adult's idea of what a teen ought to be, and I really loved that.

The premise of LEGENDBORN is kind of weird. Basically, people who are descendants of the Knights of the Round Table have magic powers called "Bloodfcraft" and they defend the world from evil demons called "Shadowborn." Bree ends up getting involved with one of their prodigal sons, Nick, when she starts to have reason to believe that they killed her mother.

Bree is a high school student taking college classes at a prestigious North Carolina university. Remnants of history-- and the grim legacy of slavery-- are everywhere, and that history ties into Deonn's take on Arthurian legend in several unusual ways. One of the things I liked best about this book was how it tackles inequality and racism. Bree faces discrimination from ordinary people (like a cop who lets her white friend go but takes her and her Asian friend in, or people who touch her hair without her permission), but the history of racism and slavery aren't ignored either, which is something that a lot of fantasy and historical fiction fail to touch on: that a lot of historical figures or people in power who exist in economies where exploitation of other human beings is a product often did terrible things to get their money and their power. In this book, all power has a cost, and sometimes the price can be unforgivable. It's a chilling and powerful lesson.

There were other things I really liked about this book, too. It's diverse. Bree is Black. Her best friend is Asian. We meet several other Black mages, and there's a focus on Black history and Black experiences. The LGBT+ rep was really pronounced and done really casually. One of the love interests is coded as bi or pan (I'm not sure which). There's a non-binary character. There are several F/F couples. There's a love triangle, but for once, I actually liked both love interests for different reasons, and I like that it's not super obvious which one Bree is going to end up with (maybe both??). The golden boy or the bad boy??? I mean, how does one choose? (Take the bad boy, obviously.)

Even though the premise was a little cheesy, I found myself really drawn to the inventive world-building, and I felt so much more invested when things got dark and things took a Hunger Games-like turn. Honestly, with the bonding Scions and the training sessions, LEGENDBORN gave me Vampire Academy vibes more than anything else. Especially with the whole "hot for trainer" trope. I could easily see this becoming a movie (in fact, I hope it does), and I'm really excited to see where the sequel goes with all of this since there's still so much left unexplored.

If you like books with strong heroines and immersive fantasy novels, you'll probably love this.