The Awakening by Jude Deveraux 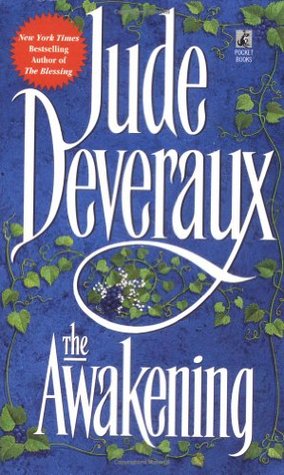 Jude Deveraux's books are the equivalent of eating macarons. Are they junk food? Yes, but they're a cut above your average cookie, and eating them makes you feel rather liberally decadent. I've read like 4+ books by this author at this point, and with a few exceptions, I've enjoyed almost all of them. All of her stories are a little steamy, and have strong heroines who are realistically empowered given the context of the times. She also isn't afraid to make her heroines or her heroes unlikable-- at least at first-- and I would say that in most cases, character development is prioritized as heavily as the romance.

THE AWAKENING is a really interesting book. It's set in the 1910s. Amanda lives on a California hop ranch. Even though she's in her 20s, her father has her under the full care of her male tutor, who is also her fiance. The tutor, Taylor, makes her a schedule for every day, telling her what she's allowed to eat, how long she's allowed to be in the bathroom (3 1/2 minutes), as well as giving her cute little assignments like translating things into Greek and calculus.

Our hero, on the other hand, is a free spirit who doesn't believe in schedules. He's a college professor who is even wealthier than Amanda's wealthy father, but instead of living a life of hedonism, he's out organizing labor unions for migrant workers sweating in the fields in incredibly unsanitary and dangerous working conditions. He enters Amanda's life when he comes to their ranch and Amanda's father and Taylor connive to have Amanda woo him into basically thinking that they're the best, and that no labor unions are necessary in such an ~amazing~ place.

It's really impressive how slimy Taylor is-- he has Amanda go to a talk about Eugenics, for example, and has apparently told Amanda that he doesn't like fat, lazy women. What a prince. Therefore, it's not really all that surprising that she's fascinated by Hank, the hot professor, even though she professes to hate him. He wins her over with food, and then, passion. But Amanda has been brainwashed pretty heavily by her father and tutor, and she is determined to believe that luxuries are wrong and that workers who unionize are really just greedy people making trouble.

One of the most poignant scenes in this book is when Hank drags her into the fields and literally forces her to experience and look at what her father's poor workers deal with every day.

I enjoyed THE AWAKENING a lot. It's the second book I've read by Deveraux that had a vapid heroine (the first was ETERNITY) and I think she does a really good job with them. I'm not always a fan of spoiled heroines but I do like reading about them when they have a really elaborate character arc, and you get to see them change and grow over the course of the story. This was a fun read.