Twin of Fire by Jude Deveraux 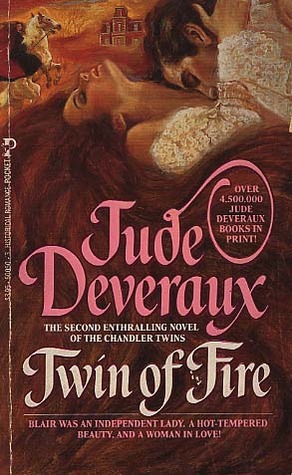 So recently, one of my friends gifted me a bag of romances, and the bag had about ten Jude Deveraux books in it, an author that I had never really sought out or read until now. I picked up one book at random, thinking I'd hate it, and ended up devouring it, even though it had problematic content (rape). Jude Deveraux is one of those authors who has a style all her own and I really admire her ability to write strong heroines who might come across as selfish or unlikable at first, but still feel relatable and, yes, realistic.

Sadly, this one didn't fit the bill.

This book review is going to talk about rape and consent, and have spoilers about the book, so if either of those things bother you, you should leave-- but they are necessary for talking about this book and why it didn't work for me, so I'm going to do it, by God.

TWIN OF FIRE is about two twins, Blair and Houston. Blair is the fiery, temperamental one who left home to become a woman doctor (unheard of, practically, in the 19th century). Houston is the icy, reserved twin who follows societal expectations. Except-- oh noes-- even though she's about to be married to their childhood friend and town doctor, Lee, she's caught the eye of a dangerous man named Kane. So to go on a date with him, as a last hurrah, she begs Blair to dress and act like her and go out with Lee so she can get her jollies.

Here's the problem: Lee and Blair have sex.

Here's an even bigger problem: Lee thought Blair was Houston when he had sex with her.

Here's an even bigger problem: Lee was getting frustrated with Houston not putting out before their wedding, so after a talk with his dad about the birds and the nonconsensual bees, he learns that his father managed to get his mother to put out by getting her drunk and "seducing" her. Instead of being like, "Wow pops, gross and so not cool!" Lee thinks, GREAT IDEA, buys four bottles of champagne, and a whole bunch of aphrodisiac food like strawberries, oysters, etc.

To get his fiancee drunk and "seduce" her.

I recently had a discussion with some people about why some books about rape work for me while others don't, and this is my personal taste and isn't reflective of all people's opinions, so keep that in mind. I came to the decision that I can stomach romance books and erotica books with rape if the rape is clearly portrayed as unacceptable, and if we aren't supposed to leave the encounter thinking that the person who did it was a good person. I'm okay with them being the love interest if the rape is accorded the gravitas the heinous act deserves, isn't sexualized, romanticized, or apologized for, and it's clear that the person who did it was wrong.

In THE TAMING, which also had rape, the heroine is incredibly hurt by the act and tells her husband that she will never tolerate that behavior again. We know the hero is a cad, and the heroine does too, but it's a medieval romance and there wasn't a lot she could do about it, and a huge arc of the romance is the hero realizing-- through his serfs and his wife and the people around him-- that he's gone through life being an incredible dick, and that he needs to reform, badly, or it might cost him the people he loves. The rape was called out, and was clearly unacceptable.

Here, getting the heroine drunk is portrayed as cheeky. And Blair's swapping places with her sister is portrayed as a prank gone wrong. Sisterly shenanigans! -- only no, that is rape. Because he never consented to have sex with her; he thought he was having sex with his fiancee. Similarly, I felt a great amount of disquiet while reading Julia Quinn's THE DUKE AND I, which has the heroine taking advantage of her drunk husband. Knowing he doesn't want children, she forces herself on him and has sex with him anyway, and then has the gall to be upset when he is angry and betrayed-- and it's clear, from the narrative, that we're supposed to side with her, that the hero is being unreasonable.

Women can be rapists and abusers, and I think sometimes people forget that, because the dialogue is often about people who identify as male raping people who identify as female. Which results in weird, uncomfortable stories like these where women do incredibly abusive things but it is portrayed as inconsequential or harmless because our society has this internalized misogynistic belief that women are inherently weaker than men, and therefore cannot be predatory-- only victims. It's a toxic stereotype harmful to all genders, because it trains people to see women as victims while omitting them from narratives of abuse.

Granted, both of the stories-- this one, and THE DUKE AND I-- are older stories, published in the 1980s and 1990s, and the way that we, as a society, view victims and abusers, and gender roles, has changed a lot since then, thanks in a huge part to the Me Too era and the people coming forward to share their stories and a growing awareness about such harmful stereotyping.

To be extra clear, I don't think the authors are bad people for writing these stories, and I don't think the people who read these books and liked them are bad people either (no more so, hopefully, than you view me for reading all those bodice-rippers), but I do think it is important to talk about toxic stereotypes like these in fiction, and how the subtext can reveal actual biases reflected in the everyday world around us.