Innocent in the Ivory Tower by Karan Dan 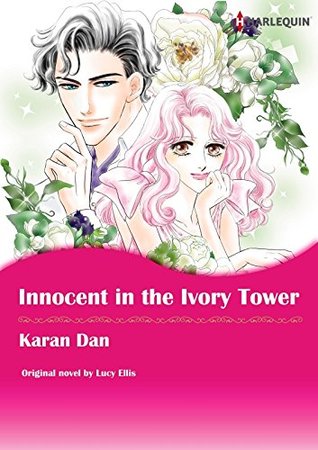 The TL;DR synopsis is Russian billionaire with mommy issues falls for the nanny of his godson. But obviously, this romance is ~much~ more complex than that. Obviously.

Look, I don't make the rules around here, but if I see a Harlequin manga on sale, I must buy and review it. This is the task I have taken upon myself to better humanity. INNOCENT IN THE IVORY TOWER is one of these Harlequin manga adaptations that originally began in Japan as the popular way to consume Western romances, but somehow cycled back here-- kind of like when you translate something into Google translate, and then translate that translation back into the original language. Full cycle. I mean circle. Whoops.

Anyway, the heroine of this book is named Maisy. She is the nanny to a child named Kostya because she was BFFs with the kid's mom. After his parents died in a tragic accident... she just kept raising him, I guess? So she's shocked when one day, Russian dudes burst into the house. At first, she thinks it's the mob, but it's actually a billionaire named Alexei who is Kostya's godfather, come to take custody.

He takes Maisy with him back to his home in Italy, to help the kid get accustomed to the sudden changes, and immediately propositions her. She "not like other girls" him, but that lasts for like two refusals because she gives in on the third or so attempt, and then realizes that she really likes him. Sad for her, because he has issues connecting to women because his mom was an actual lady of the night who had him when she was sixteen, and all of his previous girlfriends were models he could happily buy off with jewels (one of them was named "Jessica Rando," which I find hilarious).

You can probably guess how this romance ends but I won't spoil it if you're new here and aren't sure how Mommy Issues and Complacent Nanny could ever end up together when they come from Such Totally Different Worlds. (Spoiler: magic.)

As far as Harlequin novels go, this one is pretty typical. It follows a Disney princess rags-to-riches story arc, where having a good heart nabs you the prince (as long as you're also pretty and don't realize how good you look without makeup). The art is honestly what gets this book a three-star rating. If you're familiar with the CLAMP comics, it's reminiscent of that. I liked it a lot.