The Takeover Effect by Nisha Sharma 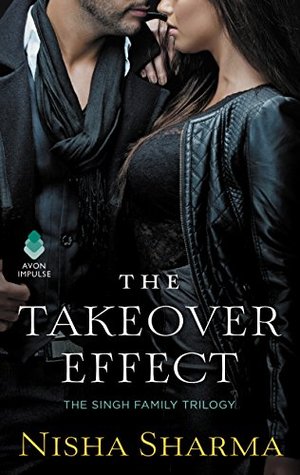 Corporate/billionaire romances were basically done to death in the wake of Fifty Shades of Grey's popularity, and since most of them were equal parts superficial and terrible, I basically stopped reading them. Until I heard about THE TAKEOVER EFFECT, a romance between an Indian hero and heroine who are on opposing sides of a business acquisition. And then I was like, "I NEED IT."

Mina is a lawyer at a firm that used to be her mother's, but was wrested away by her terrible uncles. They're holding partnership over her head with her newest assignment: guide Bharat (a tech company) through their takeover and advise them to agree to the terms, and she'll be made partner. With a heavy heart, Mina goes to her new assignment, uncertain of what she'll do.

Hem is the prodigal son in his family. He turned his back on the family business before it went public, but after his father has a heart attack due to the stress of his suddenly struggling company, he returns to help out with damage control. And obviously, the first time he sees Mina, he can't take his eyes off her.

The two of them have to fight their attraction to each other since a relationship would be a conflict of interest, and that's very important because it's starting to look like Bharat's sinking ship is an act of corporate espionage. Someone wants the company to fail. Hem and Mina suspect it's probably WTA, the company that wants to see the takeover happen, but the burden of proof is entirely on them.

As it turns out, I've actually read something by this author before-- MY SO-CALLED BOLLYWOOD LIFE, which I did not like. This book was leaps-and-bounds better. Mina is one of the strongest romance heroines I've encountered in a while. I loved her fortitude, her competence, and her agency. She was willing to do what it took to succeed and make herself happy. Seriously, she was the best. I was less in love with Hem, who was very alpha (which is not really my cup of tea). He's much more gentlemanly and respectful than your typical billionaire hero, though.

Honestly, this could have been so cliche, but the corporate espionage parts were actually some of the best. I can't tell you how nice it is to see a corporate romance that isn't all garish conference rooms and mysterious business portfolios. This actually felt real. I also love how Indian culture was infused into the story. Mina and Hem's interactions with their families, all of the insights into tradition and cultural norms, and the WONDERFUL, drool-worthy descriptions of food were A+.

I'm giving this three stars because I liked it, but there were also things in it that it didn't do so well. I wasn't that fond of the hero. He wasn't awful, or anything like that, he just wasn't a favorite. I also felt like the sudden and intense closeness they felt was a little contrived and weird. I know, this is wish-fulfillment fantasy in book form and the author did manage to find a way to make it work (sort of), but things were so rushed along that I found myself wondering if they had met before as children and I missed it, or if they had some sort of previous connection to explain their intensity. I kind of wish that had been the case, as that would have helped me suspend my disbelief.

That ending though... it was one of the most satisfying conclusions I've paid witness to in a while.