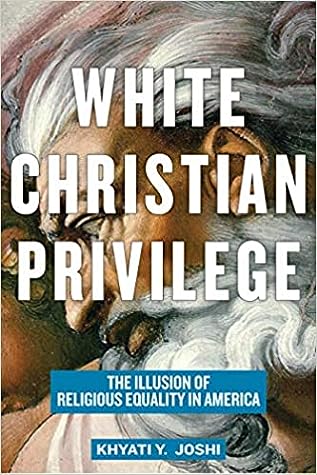 I initially had no interest in reading this book but then I saw a review for it that, to me, felt like such a bad take that I just had to get the book and see for myself. This is written by a professor and reads like a textbook (in fact, I think it is a textbook), which doesn't exactly make it pleasure reading material, but it's such an important topic-- especially NOW-- that I honestly recommend reading it anyway. The only downside is that the people who would actually benefit from this book the most are probably the same individuals who are going to rate it one star because of knee-jerk emotional reactions, which is a terrible shame.

I come at this book from the perspective of being someone who is white but non-religious. I was not raised with religion in the home, and even though I know a little bit about Christianity, I'm really not all that familiar with it. In this book, the author, Khayti Y. Joshi, talks about the hegemony of Christianity in the United States, and how even people who are non-religious benefit from religious biases-- especially if they're white-- because people will typically assume you're Christian unless you tell them otherwise.

The main assertions of this book are that (1) people often conflate patriotism with religious fervor-- specifically Christian religious fervor-- and the two should really be separate in order to have a more fair and just society because (2) there are now a number of individuals who identify as either non-religious or with religions that are not denominations of Christianity (Zoroastrian, Buddhist, Muslim, Hindu, etc.) and (3) letting Christianity be the status quo for the United States results in either deliberate or accidental discrimination and failure to accommodate, whether it's forgetting to include a vegetarian option on a work function's menu or actively targeting and harassing members of a non-Christian religion (as we sadly saw in the post-9/11 atmosphere, onward).

This book is definitely going to be a bitter pill for some people to swallow but I hope people read this and gain something from it. Most of the reviews I saw for it were quite positive and it made me happy to see many people who identified themselves as Christians reading this book and talking about how it made them think about how they could change and become more inclusive. As someone who is not religious, I can definitely see a lot of the ways that Christianity has seeped into the everday trappings of life in the United States, whether it's "God Bless the USA" signs, the "one nation under God" line in the pledge of allegiance (which I have never felt comfortable saying), the abundance of religious-themed cards at Christmas and cards with Christian iconography, and even the fact that our calendar revolves around Christian holidays, with things like Christmas and Easter being national holidays, but not things like Eid-al-Fitr and Eid-al-Adha, Diwali, Ramadan, or Hanukkah.

Joshi talks, towards the end, about how some of her students find her classes divisive and take them to mean that she hates people who are different from her, which is a sad take. You can be critical of something you like or love, and taking issue with problematic facets of our country definitely does not mean that you hate the United States. I think the past four years have taught us all that we have LEAGUES of improvement left ahead of us, and just taking small steps to become more inclusive can lead to big changes for all of us as a whole. Whether it's giving employees religious holidays off (without forcing them to take their own PTO) or providing lists of ingredients and vegetarian alternatives at work and social events, you can make pretty big changes with very small steps.

At the very least, this is a book that should make you stop and think.