When Angels Fall by Meagan McKinney 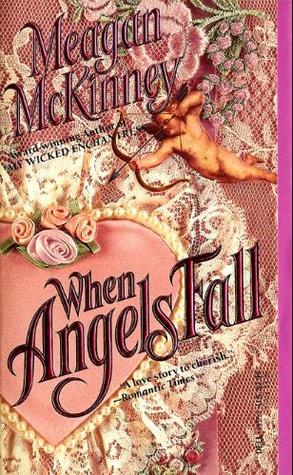 Some readers like alpha heroes. Some readers like beta heroes. Me, I have always enjoyed a conniving gamma hero who could just as easily double as the villain. Meagan McKinney gave me exactly that in one of her previous works, LIONS AND LACE, which had one of the best revenge-themed plots in a romance that I can remember reading about for a while. So I was very excited to get my hands on all of her other works, including this one.

Lissa is called "Lusty Lissa" by the cruel townsfolk where she lives because her mother was an adulteress. Her parents suffered a tragic fate and are now dead, but their legacy lives on, and because of her ethereal beauty, everyone assumes "like mother, like daughter." Effectively orphaned, Lissa has assumed responsibility over her blind sister and young brother, but even though they were all affluent growing up, they have all but fallen into ruin, and only pensions from a distant relative are keeping them afloat.

The Marquis of Powerscourt, Ivan Tramore, used to be poor but is now immensely wealthy, since his father decided to make him his heir despite him being illegitimate. Now he has returned to the very place where he once used to work as a stable boy to take what's his-- and we're not just talking property here, oh no. Because back when he was working class and Lissa was a lady, the two of them had a ~moment~ and he has never forgotten that moment, or his dark attraction to her, which has slowly boiled into obsession.

First, let me say that I love an intelligent, cunning hero who can scheme. And Ivan is such a schemer. I loved how manipulative he was. Problematic? Oh yes, but for the sake of Romancelandia, I could ship it. I also loved the slow burn attraction between the characters, and how both of them were so scarred from past hurts that they were unable to let down their guard to each other. It kept things interesting, and the tension and the emotional melodrama were just so well done. Not that I was surprised. LIONS AND LACE had me all but crying in frustration at parts and, like this book, reminded me a lot of a historical Hana Yori Dango, which is only my favorite manga ever.

Anyone who likes gamma heroes, slow burn romances, revenge plots, "I've loved you for years" tropes, and obsessive heroes who aggressively pursue the heroine will love this book, I think. It's a little dated, but the hero is not as problematic or as predatory as some, even if there are some scenes that hinge on dubious consent. I'm trying to decide whether I loved this or LIONS more and I honestly can't-- they were both so good. Guys, I think I have a new favorite romance.