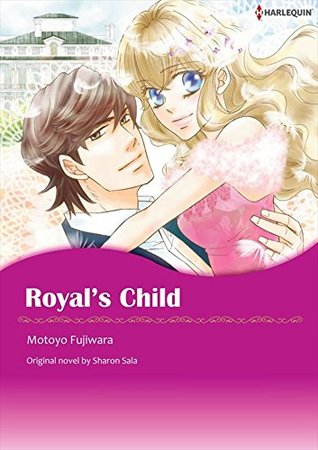 ROYAL'S CHILD is a holdover from the last Harlequin manga sale I participated in. I bought it on impulse and never finished it-- I think because I was bored. This is definitely one of the poorer manga I have read, because the plot is just so ridiculous. I've read and enjoyed adaptations by this mangaka before, so that isn't all her fault, I'm sure. Manga artists are somewhat limited by their source material after all.

After being sexually harassed by her employer, Angel quits her job and hitchhikes to seek her fortune, but when she finds herself being stalked by a creepy man who thinks she's fair game, she goes off-road, hiding deeper in the fields, where she encounters "Royal Justice" and his daughter, Maddie. Royal. Justice. That's his name-- omg.

Anyway, Royal thinks she's a horse thief but Maddie thinks she's the "angel" she saw while having fever dreams from a venomous spider bite. Apparently a woman she hallucinated told her that an "angel" was coming to stay with them. She's been drawing pictures, and to Angel's surprise, the pictures Maddie has been drawing showcase not just a ghostly bride, but also a girl who looks like Angel with Angel's heart-shaped birthmark.

At Maddie's insistence, Angel stays on as her nanny, despite a lack of references. Royal ends up calling her creepy ex-boss and threatening him if he ever bothers Angel again. They feel attraction to one another despite being strangers. A power outage and a tornado force them even closer, and when Angel is stalked by a man with murderous intent, Maddie's psychic visions once again save the day. Oh, and it turns out the ghost bride is actually her dead mom's ghost. Cool, huh?

This book was so cliche and bad. I thought the art was fine, although Angel was drawn to look so young, she seemed like a child, which I didn't like. There were too many lazy writing tropes. The ghost mom, the deus-ex-tornado, the evol murderer, and the whole nanny thing with the child being used for emotional manipulation were all overkill to me. Didn't really care for this story much at all, which makes me think that Sharon Sala is probably not an author for me.