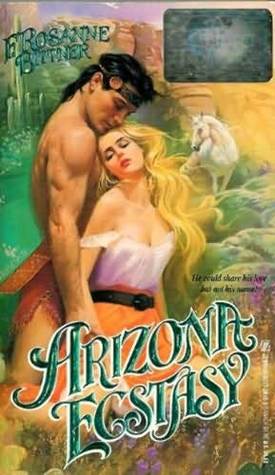 Rosanne Bittner is known for her Western romances, so I was excited to find a copy of ARIZONA ECSTASY, which has one of the most cheesetastic titles I've seen on one of these. CALIFORNIA CARESS (which, being from California, I one day hope to own) places a close second. Also-- that cover! I am obsessed with that cover. Zebra bodice-rippers, if you can find them, always seemed to have the best covers. (I believe this one is from the Lovegram collection.)

The hero of this book is Chaco, who is half-Native, half-White (this being the 80s, he and his people are referred to repeatedly, and incorrectly, as "Indians"). The heroine is a blonde White woman who, according to the summary on the back, is kidnapped by him after he raids their wagon and kills her mother. Cool...

ARIZONA ECSTASY tries, with mixed success, to be more sensitive to Native people. After a brief snapshot of the present, where Lisa, the heroine, is already in love with him, we go back to the past and learn about Chaco's POV and why he dislikes White people so much. The book gets points for being pretty blunt about how Native people were screwed over and kicked off their land by White people, and for Chaco it's even more personal, because his Native father loved his White mother, only to have her end up with a White man and be disgraced and dishonored in a duel that ended up with his own willing death, which White people then mocked and celebrated, since they felt "victimized" by the Apache raids on their own land.

I think the book has two major flaws: one, the writing-- it's not written very engagingly, and the characters don't really feel fleshed out. It's hard to explain how some books don't grab you while others do, but the writing of this one just felt very bland and basic, and I wasn't all that into it. Second, and perhaps the one that will probably keep more people from reading this, is that it shares a problem that a lot of Native romances have-- it has a very dated, simplistic view on a complex culture, and doesn't really divert from the usual stereotypes. Sometimes, a book can be so unapologetically, WTFistically (yes, that is a word) un-PC that it's almost fascinating and entertaining to watch, but when you get the sense that a book is trying-- and failing-- to be respectful, it becomes painful and unpleasant and incredibly uncomfortable.

I've tried reading a couple Native American romances and disliked almost all of them, partially because of the offensive stereotypes and partially because none of them were written all that well. In my review of FIRST LOVE, WILD LOVE, which is the only Native romance to date that I actually did enjoy, because it was well-written and didn't resort to the usual tropes, I delve a little deeper into some of the problematic themes that plague Native romances as a group, and how that ties into how we, as a country (if you live in the U.S.), seem to feel way too comfortably appropriating Native culture to this day.

Published in 1989, this may well be a product of its time, but unlike some of these bodice-rippers, it doesn't age all that well and I'd be comfortable with it staying in those times.