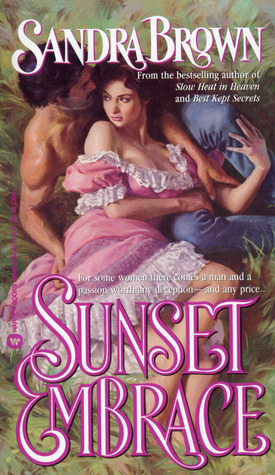 I actually bought this book because of all the negative reviews for it. They were saying that the hero was cruel, that the plot was OTT, and that there was dubious consent. None of those things particularly bother me, and given that this was published in 1985 when that was basically the de facto standard for books of this type, I wasn't particularly surprised. But SUNSET EMBRACE doesn't pull back any punches when it comes to its problematic content. The story literally opens with the grievously ill heroine giving birth to a stillborn baby in a field that was the product of abuse.

From there, it gets worse. The heroine-- Lydia-- is taken in by a kind-hearted family who are part of a wagon train. She stays with them for a while, until we learn that one of the other wagon owners, a man named Coleman, has just had his wife die in labor. The family that took Lydia in decides that she'd be a great wet nurse for the hero, Ross's, baby, never mind the fact that he has nothing but bad names to call her, all variations of whore, slut, and tramp, and says he'd rather let his new son die than take sustenance at the bosom of a woman of ill repute.

But the matriarch of Lydia's savior family, known to us as Ma, is determined to play matchmaker, and Lydia ends up staying in Coleman's wagon... and from there, it gets worse. This book is like 300+ pages of diet lactation erotica. The hero goggles at her every time she feeds his son. At one point, he expresses jealousy that his son "knows what she tastes like." Eventually, he goes in for a taste of his own, because of course. We are constantly informed about the heroine's endowments, and how she doesn't fit into any of her dresses on account of her chest being too big. For some reason, her blouses keep getting wet, so their are lots of descriptions of her soaking wet "impudent nipples" and the like. During one sex scene, the hero implores for her to "nourish him" and the heroine wistfully bemoans the fact that she has no more breast milk to feed him with.

There's several side stories that are equally cringe. A couple of the teenagers in the camp have this really graphic and lurid affair with each other, and one of them is a girl named Priscilla who ends up becoming a prostitute at the end of the story (and her chest gets tons of description time, as well). Coleman's father in law is also running up a bounty on him because it turns out he used to be a bank robber and he believes Coleman only wanted his daughter for her fabulous fortune. And then, there's Lydia's step-brother-- the one who got her pregnant through rape-- who is now choking prostitutes to death when he's not planning on taking Coleman's bounty money for himself.

I don't even know what this book is. I've read a lot of WTFistically written bodice-rippers, but this was honestly one of the most squeamishly bizarre. In addition to all of the other stuff, the one Black character is threatened with a lynching for a murder he didn't commit (don't worry-- I believe he actually ends up all right at the end of the book), one of the villain characters throws the N-word around to show us all he's a bad guy, and the hero rapes the heroine after trying-- and failing-- to get it up in a whorehouse. Why? Because she was tending to a male friend with tuberculosis and he decided they looked too friendly, so he "punishes" her, a rape victim, with sexual assault.

I thought about giving this 2* at first because it was just so over the top and gratuitously awful that I was like, "Welp, I can't help but admire the ballsiness of this author." But I didn't really enjoy it all that much, and $3.99 was a lot to pay for a book I really had to force myself to finish. I did find this story morbidly fascinating but it wasn't pleasant to read, and in terms of WTFery that this author has written during her bodice-ripper years, I think I prefer SLOW HEAT IN HEAVEN.