Heart of Honor by Kat Martin 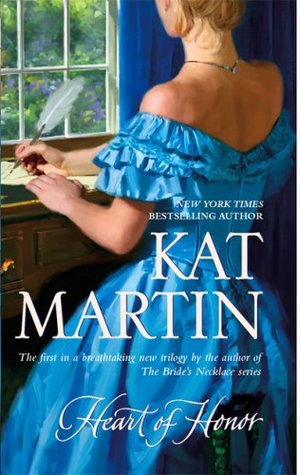 I recently read one of my first books by Kat Martin, which was DUELING HEARTS, one of her earliest books from the bodice-ripper years, which gave me strong Sandra Brown vibes-- only with a much more empowered heroine who literally and figuratively wore the pants for a lot of the story. I was curious to see how she would grow and develop as a writer, since the first book I read of hers was published in 1989 and this was published in 2006.

HEART OF HONOR is about a bluestocking heroine named Krista Heart who runs a column called Heart to Heart, which touches upon many serious social issues and often faces opposition from political and industrial persons of interest. Her father is an Indiana Jones type who is interested in Ancient Norse antiquities, and has basically let her run wild, but her grandfather is pushing for her to marry because the inheritance must pass on to her male descendant.

Cue the hero, Leif, who was shipwrecked and abducted by a sleazy circus owner who slaps him in a cage as a starring attraction. Leif is from an island that has-- miraculously-- remained isolated all these years, so all of the people on the island still speak Ancient Norse and adhere to those customs. What a coincidence, then, that Krista and her father are practically the only people in England who are in a position to not only understand but help the hero. Which they do, taking him into their home.

I think my problem with this book is that it requires-- as other reviewers have said-- too much suspension of disbelief. Leif's characterization in this book reminds me a lot of the "primitive" romances I've read, where the hero is a Tarzan-like (or in some cases, an actual caveman) guy who is naive to the ways of modern customs and often portrayed as over-sexed. He also has an animal sidekick, and it's been my experience in romance novels that if a hero or a heroine has an animal sidekick, it's indicative that the novel is going to be overly precious and not good.

Others may well enjoy this but it is not my cup of tea at all. It's currently only $1.99 on Kindle, though, so if you're intrigued, it's a cheap way to try your luck and see if the book is right for you.