Fire and Sworde by Theresa Michaels 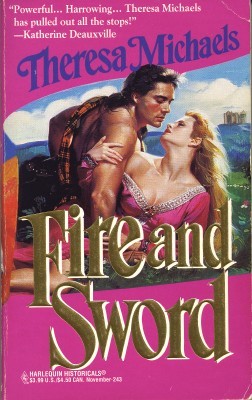 FIRE AND SWORD came in an assortment of romance novels I bought in bulk and the hot pink cover beckoned me, even as the summary tantalized and beguiled. The book is such a tease, because it opens with scenes of brutal political machinations that wouldn't be out of place of Game of Thrones, but by the end of the book, it spins out into a weak, annoying facsimile of Catherine Coulter at her worst. It's been a while since I was so let down by a romance novel and I just have to tell you about why this one was so fail.

The story revolves around two Scottish clans who have been at war but now have a tenuous peace because of a brokered marriage: the Gunns and the MacKays. Bridget, one of the Gunns, is marrying Liam, one of the MacKays. And to cement peace even further, Bridget's younger brother, Micheil, is betrothed to Liam's sister, Seana. Of course, Micheil is an older teenager and doesn't see much in Seana, an actual child, and after threatening her to remain pure for him, he goes off to have sex with the OW, Fiona.

Remember that name, Fiona. You'll be hearing more from her.

Anyway, weeks pass, and then the Gunns are shocked when Bridget returns, sans Liam, disfigured from beatings. She claims that Liam did it. So the Gunns go to war against the MacKays. The parents of Seana and Micheil are both killed in the battle, but the MacKays come off way worse. Even so, Micheil and his crew vow that they must be utterly destroyed, and Seana is spirited away to a convent where she can be raised until she's old enough to marry Micheil-- where he then promptly plans to beat and disfigure her as his sister was. And Bridget is so ecstatic about this, it's almost sexual. Ew.

Anyway, fast-forward to the "present" day where Seana is now an adult. Obviously, she's gorgeous, and obviously she has no idea what's going to happen to her, except she knows that it isn't good, and that the people holding her hostage in the convent want their revenge on her family. She manages to get out to the fair, where she has a run-in with Micheil who doesn't recognize her but wants to fuck her (because she's hot). He tries to force himself on her and she flees, and then he figures out who she is, but he wants her anyway (because she's hot) and vows that he will find her.

Anyway, he rescues her from raiders who also want to rape her, takes her to his lands, where there's a forced-seduction scene (and then several more). When Seana finds out that the man who told her his name was Jamie is actually Micheil, she's furious-- and then, resigned. Because of course he tells her that without his protection, terrible things will happen to her (obviously Bridget volunteers to make those things happen). There's another forced-seduction scene, and this one feels way more like rape. Seana gets pregnant from it, and his clan is infuriated that he's boinking the object of their revenge.

OK, this is where it gets REALLY weird. Micheil has a bastard brother named Niall who hates him and wants to usurp his place. I started skimming pretty heavily but I think it's implied that he's been having sex with both Bridget and Fiona (Micheil's OW). Bridget, I believe, was cuckolding Liam with Niall (obviously Liam didn't beat her-- she was lying about that). I wasn't quite clear if she hurt herself or if Niall did??? I must have missed that part. BUT ALSO APPARENTLY THEY'RE WITCHES, because they brew up a potion to drug Micheil and Fiona rapes him by pretending to be Seana while feeding him drugs and Bridget laughs maniacally to herself.

Then there's the final showdown where all of this is revealed and they've kidnapped Seana's baby. Fiona, I believe, wants to kill it. But Bridget thinks it's hers. Bridget demands that Micheil kill Seana before bringing the baby back from a cliff. But when she finds out Fiona wants to kill it, the two of them fight and literally both off themselves by going off the cliff. Seana and Micheil live happily ever after and there's a "touching" scene when he wipes her breastmilk off the baby's lips and drinks it, and then they kiss with the baby between them "in a loving arch" and I'm just like ew.

Disturbing shit doesn't really bother me that much in books but bad storytelling does and this was just ??? First, Fiona was just such a bad villain. So was Niall. There was no suspense. They had all of the subtlety of, well, a Game of Thrones villain. They literally exist just for you to hate them. Also, I was confused about how Micheil's brothers kind of seemed to flip-flop in their roles in all this, and I thought that Seana forgave Micheil way too quickly considering he killed her whole family. The weird witch-shit, deus ex rape-inas, and the Big Misunderstanding were all just icing on the cake.

I'm bumping this up to two stars because I did (barely) manage to make it to the end and I was invested enough in the storyline that I wanted to continue, but now I'm mad. This could have been so good but it was like the author chickened out at her own dark beginning and had to tone things down. This could have been a really complex and tragic story and instead it was weak sauce.