The Conquest by Jude Deveraux 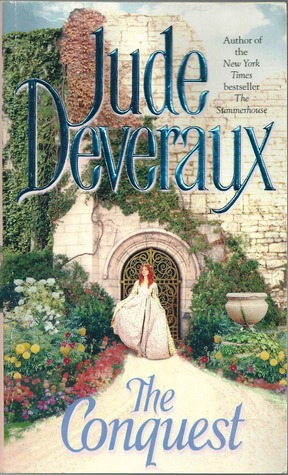 I'm finding that Jude Deveraux's books can be hit or miss with me. Most of them make for light, pleasant reading, but there are a couple that cross the line over what I'm willing to tolerate in fiction. Luckily, THE CONQUEST, a companion to one of her other medieval books, THE TAMING, is one of the former: it's enjoyable costume historical fiction featuring an enemies-to-lovers romance.

Zared, who we meet in the previous book, has been raised her whole life as a boy. This is because of the violent land war between her family, the Peregrines, and the Howards. Given the Howards' history of abducting Peregrine women, Zared's older brothers thought it made sense to hide their sister's gender and train her to fight, so she would be safe and competent and not vulnerable.

The hero in this book is Tearle, the youngest son of the Howard family, a knight who has just returned from France. He has no horses in this race and thinks his brother Oliver's obsession with the Peregrines borders on delusional. One day, he encounters Zared and recognizes her instantly as a girl, and when their altercation results in a knife to the ribs, he finds himself fascinated by the fierce girl in boys' clothing.

Tearle, to get closer to Zared, disguises himself as a squire named "Smith" and lets Zared's brother, Severn, think his sister in law, Liana, sent him. Zared knows him for a Howard, though, and is torn between her allegiance to her family and her growing feelings for Tearle. Severn, meanwhile, is trying to win the hand of a noblewoman named Anne in the tournament, but when everything starts going wrong and his family honor ends up at stake, Zared ends up having to choose between her duty to her family and her own heart-- which is where things get even more complicated.

I really enjoyed THE TAMING, despite the gross hero, but this romance was even better. I liked how Zared's character was done. Her body dysmorphia, and her discomfort with presenting as female even though she desired it, were all really well done. A lot of times, gender-bending fics ignore these sorts of feelings and discussions, which ended up making the story feel more modern and real. Also, there's none of the usual bisexual erasure that happens with the hero going, "Oh, thank God, I'm not attracted to a boy," because the hero knew she was a girl the whole time.

I also liked how Tearle was a genuinely good guy. Rogan, the hero from the previous book, was a jerk and a rapist, which didn't exactly make him a character I wanted to root for. Tearle tries to court Zared in earnest and seems bewildered when all of his plans go awry. Zared, for her part, was also a pretty great heroine-- I liked that she was described as having hard muscle, despite being slim, and that she was such a bad-ass. Even when she started dressing like a lady, she didn't lose that edge.

The side-romance between Anne and Severn was amusing too. Talk about a misunderstanding.

If you enjoy light medieval romances, this is a decent story. It's not a keeper or a book that I would probably read again, but it serves as a nice close to the Peregrine duology.