Through the Storm by Beverly Jenkins 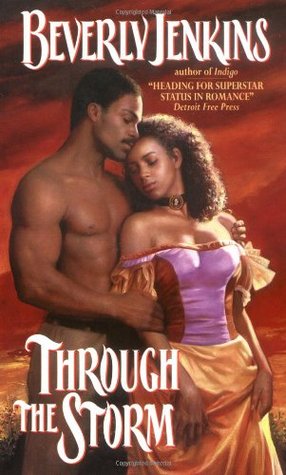 LOOK AT THAT COVER! I swoon.

Beverly Jenkins is one of my favorite romance authors. I love that she writes historical romance from the perspectives of Black men and women in history, and that all of her books are filled with historical factoids that are true, that I never learned about in school. For example, in this book, I learned about "contraband camps," or the refugee camps that slaves fled to during the Civil War.

THROUGH THE STORM is about Sable, who is Rhine's sister from FORBIDDEN. Characters from INDIGO also make a cameo, and the rest of the LeVeq brothers have their own love stories in subsequent novels, so those Easter eggs are also something you can pretty much count on in Jenkins's books. THROUGH THE STORM opens with a bang, with Sable's aunt telling her about her heritage as an African queen, and the prophecy of fate, before setting the house and their master ablaze. Sable escapes in the chaos, heading North, where she meets Harriet Tubman. (WOOHOOOO!)

Tubman takes her to one of those aforementioned camps where she meets a man named Raimand, who is a charming Haitian officer of high rank. The attraction between them is instantaneous, but he wants her as his mistress, and Sable, with her new freedom, doesn't want any sort of ties or obligations to bind her anew. With the threat of her previous master pursuing her like a shadow, Sable finds a path for herself in the camp, before she's forced to flee again even further North.

I liked THROUGH THE STORM a lot, although I think the beginning is better than the last 25%. I would give the beginning 4 stars, the middle 3.5 stars, and the end 3 stars. I didn't like Raimand as much as I liked some of Jenkins's other heroes, specifically Griffin and Rhine. He's a bit too "alpha" for my tastes and it was a bit off-putting that he had a mistress, even though I understand that this was pretty typical for the age, and it did happen while he and the heroine were separated. The sex scenes in this book were also pretty cheesy with "love-gentled" bites and talk of "swollen gates." Eek.

For those who don't like mistresses and OWs, she's basically the chillest mistress ever. When Raimand goes to break things off, she's just like, "Oh, okay, that's cool." My jaw just about dropped. I guess I've been reading too many bodice-rippers with crazy OWs who are willing to move heaven and earth to wreak vengeance upon the heroine. I must say, that was pretty refreshing.

As always, Sable was a great heroine. I thought it was interesting that she had tribal tattoos burned in her skin by her aunt, and I loved that she was willing to shove the hero aside the moment he became an impediment to her own well-being. Even if I don't love all of Jenkins's books equally, I can always count on the heroine being strong and competent and full of agency.

Also, the villain in this book was AWFUL. I like that he got his comeuppance, although it wasn't as satisfying as in the books when the heroine gets to deliver that comeuppance herself.

Overall, THROUGH THE STORM was a pretty good book. It's not my favorite Jenkins book and I did skim a little towards the end, but it had everything about her books that keeps me coming back-- strong heroine, caring alpha hero, fast-paced action, lovable side characters. Even the cheesy sex scenes have their charm because they are preceded by steamy banter and prompted by love.

If you're tired of wallpaper regency novels, give Beverly Jenkins a try!