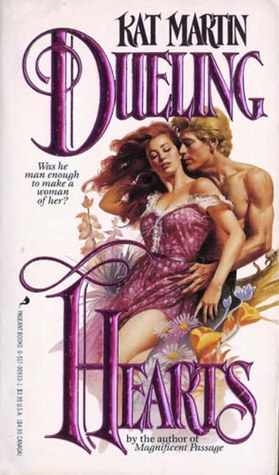 As a romance, this isn't all that great. But as entertainment crack cocaine, it surely hits the spot. Published in 1989, DUELING HEARTS kind of traverses the line between dark, traditional bodice-ripper, and the ones of the 90s that tried to undo some of what their rapey predecessors had done by having strong female protagonists and heroes that were, well, a little less rapey (with mixed success).

Set in rural California, DUELING HEARTS is the story of Molly James and Sam Brannigan, owners of logging land that border each other's and sore enemies. Not only is their land in dispute, but Sam's father allegedly raped and murdered Molly's mother. So, yeah, they have good reason to be at each other's throats, which is why the book opens with Molly literally opening fire on Sam and his brother.

Molly is a pretty awesome character. She literally wears the pants, and she runs her ranch in her father's absence. Unfortunately, all the men in her life want to control her, be it Sam, or her creepy Uncle, Jason Foley, who definitely has a Judge Claude Frollo vibe going on.

Eventually Molly and Sam end up in a marriage of convenience in order to sell their timber, because Molly was planning to sue Sam, but with the territory in dispute, nobody would give them contracts. Their marriage nullifies the dispute, and gives them a reason to act on their reluctant attraction to each other (*cue evil laughter*). The problem is, Sam is so quick to be abusive and angry to Molly, even when she proves time and again that she's actually a great gal. Even by the end of the book, when something goes wrong, she is always the first one he goes running to blame.

And poor Molly-- her spirit was really beaten down by the book. She is brutally whipped and scarred by her uncle (who is angry he can't have sex with her). Sam almost rapes her on their wedding night because he doesn't know she's a virgin and thinks she's just acting coy to make a fool of him. Sam blames her for the sabotage that happens on their land and accuses her of trying to murder his brother. It's just a long laundry list of Molly-shaming and it was actually quite nauseating.

I'm giving this a high rating regardless because the story absolutely fascinated me with its V.C. Andrews level of trash story-telling, and I liked the California history. Book gets bonus points for shit-talking Manifest Destiny and the people of color in this book were portrayed with LEAGUES more care than most books of this period. Granted, I went in with exceedingly low expectations, and there were still a lot of dated stereotypes, but it was nice to see the Spanish written out mostly correctly and the Chinese characters and Latino characters treated with some respect and actually having roles in the story and distinct personalities. So there is that.

I probably wouldn't recommend this to anyone who prefers the format of contemporary romances, and doesn't like brutal alpha douchebag heroes cast in the mold of 80s Sandra Brown or Linda Howard books, but if you're into retro bodice-rippers, this is a cut above what you'd expect.