The Vampire Viscount by Karen Harbaugh 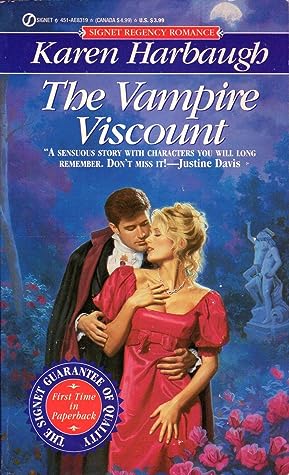 THE VAMPIRE VISCOUNT was recommended to me on Twitter, given my love for historical romances and vampires, and the premise intrigued me. Leonore's father is a compulsive gambler and one day, when he ends up in debt to a mysterious lord, he casually decides to barter off his daughter in marriage. Leonore is obviously horrified, thinking that her husband-to-be is going to be old or cruel or both, and is therefore surprised when she meets the apparently young and very charming and rakish Lord Nicholas St. Vire.

But Nicholas has a secret-- many years ago, he was turned into a vampire while attending a salacious event at the Hellfire Club, and the woman who turned him, a woman named Mercia, has no intentions of letting him go. Nicholas is tired of being a vampire and having the dulled senses (not being able to taste food or listen to music with the enjoyment he did in life) and plans to perform an alchemical spell to become human again: but first, he must marry a willing virgin and convince her to fall in love with him.

The story has an interesting fairytale quality to it that is reminiscent of other enchantment type stories like The Little Mermaid or Beauty & the Beast, and I did like how that element was introduced into the storyline. In the foreword for this book, however, the author writes about how she is "probably" the first to write a regency-era romance about vampires, and she is actually not. VAMPIRE VISCOUNT was published in 1995 by Signet, and another regency romance about vampires, MIDNIGHT KISS, which was published in 1994 by Pinnacle, precedes it.

Both stories are superficially similar. They're about angsty vampires (sigh) who hate being vampires and wish to use alchemy/bad science to change back into humans. Nicholas, the hero of this book, was a much better hero, however, and the erotic scenes in THE VAMPIRE VISCOUNT were far steamier. I do think THE VAMPIRE VISCOUNT is a better book, but it was definitely not the first. It's actually funny that Nicholas was turned by an evil vampiress, because she reminded me of a much less evil version of the vampire, Asharti, from Susan Squires's THE COMPANION (another vampire regency). I couldn't help but wonder several times if Squires was inspired by this book.

I did enjoy THE VAMPIRE VISCOUNT quite a bit but the heroine, Eleonore, was whinier than I typically like, and even though her suffering was warranted, she wasn't really a heroine that I wanted to get up and root for. And even though Nicholas does get his bite on a handful of times, the focus of this book is primarily on the attraction between Nicholas and Eleonore and how their marriage of convenience gradually blossoms into a true marriage of the heart. There's nothing wrong with that at all, and the romance is sweet (and steamy!), but those who prefer darker vamp stories will probably not enjoy this one. Still, if you're in the mood for fluff with edge, this is the book for you.