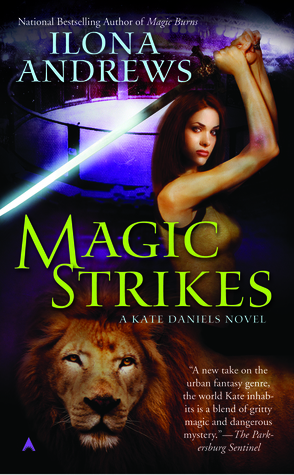 Urban fantasy was my method of escape in college when I was frequently mentally exhausted from writing ten-page research papers and fatigued from pulling all-nighters. After reading endless books about psychiatric disorders, behaviorism, and the physical structures of the eye, sometimes it's nice to kick it with something that's just pure fun-- and for me, PNRs were always that. I will forever have a soft spot for vampires, shape-shifters, and witches.

The Kate Daniels series is basically the epitome of every book I loved as a woman in my only twenties, only upgraded, and equipped with a fancy sword. It borrows heavily from the folklore and mythology of all cultures (not just Western ones) and features a jaded, quippy heroine who the authors also aren't afraid to portray as emotionally vulnerable. MAGIC STRIKES, in particular, really delves deep into Kate's personal history and what makes her tick.

This book takes on a Hunger Games-like flavor when we learn about an underground fighting league that pits magical creature against magical creature in a high-stakes stadium tournament that frequently results in fights to the death-- only the price of defeat may be higher than anyone thought. Creatures are turning up dead and there's some sinister challengers who read as human but have abilities that no human would have, and things are bad enough that even Curran's Pack members are trying to undermine his authority, out of fear of starting an out-and-out territory war.

So you know, just another day in the world of Kate Daniels.

I didn't like this book quite as much as the previous book because this one was so brutal and violent and cutthroat. The other books in the series aren't exactly free from violence, but I must admit, I'm squeamish and I tend to balk at the presence of too much graphic physical violence. The gladiatorial elements were compelling though, and everything that happened in this book was relevant to the plot, but I was surprised at how much more violent it was than the previous too books. Poor Derek.

That said, I really appreciated how diverse this series was/is. Especially considering that it was published 10 years ago, before that was really the status quo and everything was overwhelmingly white. Andrews really makes an effort to be inclusive and while there are some stereotypes that have since become outmoded, it really stands out from its contemporaries, which tended to be way less diverse and feminist in tone. I love that Kate Daniels doesn't just fall over for a man, and she doesn't eschew femininity like Anita Blake did. I mean, she wears underwear with bows on! Love. Being a strong woman doesn't mean hating on feminine things. I'm glad to see Team Andrews gets that.

Also, Curran! I'm still Team Rogan for life, but this book made me realize why everyone loves him. That cliffhanger ending! I am DECEASED. Thank goodness I have books four and five on standby.

Definitely recommend this book to anyone who loves UF/PNRs but is tired of the same ol' same ol'.