Choosing Her Alpha by Isoellen 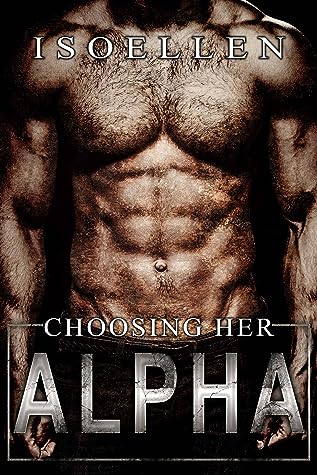 How did I end up becoming the inadvertent Smut Queen of Goodreads? One day, you're just an ordinary individual, the next day, people are blowing up your socials with links to books that they want to see you review. There's probably a cautionary tale in that somewhere. Being ordinary is boring, though.

CHOOSING HER ALPHA initially made me guffaw when I saw it. The title is cheesy, and the guy on the cover-- yike on a bike! His abs have abs, and there's so much body hair on this dude that it seems to be growing like kudzu. I'm somewhat new to the whole omegaverse premise, but if you're unfamiliar, it's actually pretty scary. It's like the big girl panties version of the sci-fi/futuristic romance genre. Think sex-caste societies, like THE CAPTIVE PRINCE, only with the outdated wolf pack hierarchies (since debunked) and enhanced anatomy that allows for things like "knots" (dick engorges, staying pinned in the female), cervical gates (so the dick can go all the way into the stomach), and gushing bodily fluids of all kind. Be afraid. Be very afraid.

To my surprise, CHOOSING HER ALPHA is exceptionally well-written, a cut above even the one Zoey Ellis book I liked. It was actually reminiscent of R. Lee Smith's work, who I consider peak science-fiction romance. Like, she is the queen of the genre. She is for that genre what the YA gang thinks of Sarah J. Maas when it comes to YA fantasy. The world-building was just so well done, and while some of the biology in other omegaverse books had me rolling my eyes and/or clenching my legs (cervical slamming? NO THANKS, BYE!), well-- this one did that, a little, but it also made sense and it seemed like the author was really going out of her way to make this an addictive, well-written story instead of a smutty erotic work drenched in mating fluids.

Sascha is an Omega Breeder, which means she's one of those females with the cervix gate thingies that allows her body to take in the super-size Alpha dicks. (I feel so dirty just writing that.) She's also, as her group implies, a prime breeder: the only kind of female who can give birth to other Omegas and Alphas. Sometimes, Omegaverse books have the A/B/O folks being some kind of humans, or humans with special abilities, but here they are a separate group of individuals entirely called "breeds." Humans are often referred to as "drones" and some of them are kept as slaves, but when they're free, they typically do day-to-day drudge work. There are also Betas, the lower-tier.

Sascha lives with her dying mother, who hated her father and hates Sascha too. Sascha thought she was going to be able to choose her own husband but she finds out that her mother, mad with hatred and pain, has decided to basically sell her as a sex slave to her step-father, who can't wait to rape her and tells her so. Obviously frightened, Sascha decides to flee to find another Alpha who can protect her from her step-father's clutches, which turns out to be a man named Kane.

Kane initially has no interest in Sascha, because despite being eighteen, she's still a "juvenile" because she hasn't hit her estrous yet. Some readers might be angry because Kane has an orgy while Sascha watches, but in his defense (1) he didn't know she was there, and (2) one of the harem women contrived that she would be there in a dominance power play that would have the Real Housewives of Beverly Hills quaking (actually-- can we get a Real Housewives of the Omegaverse spin-off? 10/10 would pay to watch/read the shit out of that, thanks). But surprise, Kane actually does like Sascha a lot, and even though he can't have sex with her yet, it's very clear that he admires her bravery.

OH MY GOD, I loved this book. The consummation between the main couple takes a while, but that makes sense and he even tells her that if he tried to be with her before she developed, he would hurt her and anyone who does that is sick. He cares SO MUCH about her, and not only that, he cares SO MUCH about his people. When we learn the truth about Sascha and her family, and how their history ties into Kane's, my heart went UNNNNNGGGG. Mindless smut is fine but well-written stories with good twists are even better, and this one had a really great message with a moral(!) hero.

Also, another thing that turns a lot of people off from Omegaverse novels is that they are rapey as fuck. Like, all the ones that I've read before, even the ones I liked, have the hero raping the heroine. This book is the first I've read where it's all completely consensual and the author did such a great job playing up the connection between them and showing Kane to be a dangerous, powerful man without making him an abuser. And while sometimes I eat up romances with problematic heroes on a silver spoon, it is also way more fun to root for a strong man with a good heart who isn't afraid to chop off some hands or bash out some brains in the name of honor (true story).

I really enjoyed CHOOSING HER ALPHA and will definitely be reading the next in the series!