Legacy of Honor by Linda Hilton 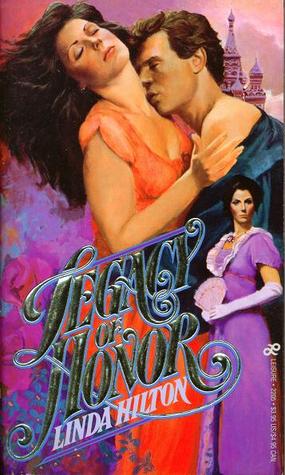 Normally, I don't make it this far in books I decide not to finish, but LEGACY OF HONOR tricked me! It had an amazing begin and then preceded to undulate in terms of quality; every time I thought about putting the book down, it got exciting. But I realized once I got to the 50% mark that I was doing more skimming than I probably should, and I've decided that I'm not going to read this book to the end.

My first book by this author was FIREFLY, and it is one of the best romances I've ever read: a Western romance with a heroine trapped under her cruel and manipulative family's thumb and a drunken doctor haunted by the past who wants to be redeemed. It is a romance in every sense of the word and, more than that, it's a tale of redemption, and of two wounded people taking solace in each other. I was moved to tears at points, heart in my throat. I was fully invested in the characters, and their pains and their victories felt like my own. I'd gladly recommend that book to anyone.

LEGACY OF HONOR, on the other hand, is a true bodice-ripper, replete with OTT wtfery and a cruel, morally grey hero who could easily double as the villain. Alexandra is an ingenue in Post-Revolutionary France. Her father was murdered by the guillotine. Now living with her aunt and step-uncle, she aspires to the trappings of the noble class, which is where she meets Mikhail.

Mikhail is a Russian count and a spy who wants to bring about the end of Napoleon's tyranny. He's taken with Alexandra and once he realizes how useful she is, he wants to use her as a spy. In some ways, LEGACY OF HONOR is like RED SPARROW, if RED SPARROW took place in the past and was written from the female gaze. Mikhail whores her out to people for information, resulting in a very strange and disturbing naked sex scene. He doesn't realize that she's a virgin until he has sex with her not-so-nicely, although that doesn't stop him from raping her later, in anger.

The scenes in this book are brutal but expected in a book about war. The hero is nearly whipped to death by the French. The heroine is held captive in a barn and subjected to sexual abuse. War is depicted as the zero-sum game that it is, and we see exactly what people do when they have either too much power or not enough of it. I know the disturbing content in this book will likely be too much for some. The whipping scene was definitely hard for me to read (and so was the rape). But what really put a nail in this book's coffin was that it felt WAY too long. It looks like the paperback is almost 600 pages, but it just felt like-- to me-- that there were too many scenes that were focused on wandering around or on side characters whose stories weren't all that focal to the plot.

I will say that I respect this author keeping her book intact. She has a foreword about how she considered making her book more palatable to modern audiences but decided to keep it in its original form. I like how vintage romance novels act as a snapshot of societal attitudes back in the day, and show the "tone" of how such knowledge of history was delivered. I've read books where the authors edited and rewrote their bodice-rippers and some of them, like Fern Michaels' end up being awful.

Even though this book wasn't for me, I think it will be a four or five star read for others. It has some very memorable scenes and I thought both leads were interesting. It was just too, well, boring.