The Witch and the Warrior by Karyn Monk 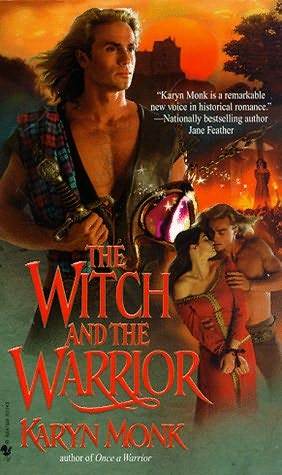 Sometimes I buy books just because the cover is so outrageous that it makes me laugh-- and this book, THE WITCH AND THE WARRIOR, is almost iconic in the sheer magnificence of its cheese. It's laid out like a stepback, with a close up of the Fabio wannabe gazing pensively into the distance, holding a pink gem at dick height that's gushing white sparkles (SYMBOLIC!). Below that, we see him and the bound heroine locked in a passionate embrace. KINKY! Only, no, because behind them, we see a girl tied to a stake, engulfed by flames-- and not the passionate flames, but the real shit.

When we first meet the heroine, Gwendolyn, she's about to be burned by her village. The MacSweens, her clan, have always been suspicious of her and her family, but after she's wrongly blamed for the death of her father, they've decided enough is enough. And her execution was expedited by the evil brother of the clan's laird, Robert, who likes to rape women, and planned on raping Gwendolyn until he found out that her father had a magical stone with magical powers-- then he decided he wanted badly enough that he was willing to kill for it. And so he did.

The entire village has come to toast and leer and celebrate Gwendolyn's horrendous death, and they've invited one of the other clans, the MacDunns, to join in the celebration. So nobody is more surprised when Mad Alex Dunn steals her right out of the fire like a naughty boy swiping the last hamburger off the girl, and makes off with her along with his men, and the daughter of the clan's laird, Isabella, who has a lot of very explicit and infuriated things to say about her kidnapping.

As it turns out, Alex wants her to help heal his sickly son, David. After his mother, Flora, died, Alex became "mad" with sorrow and extremely overprotective. But nothing his healing women have done has helped, so he's turned to witchcraft and the devil. Knowing that her usefulness is the only thing keeping her alive and out of the clutches of Robert MacSween, Gwendolyn agrees to see to the young boy, figuring that since her mother was a healer, maybe she can rough her way out of the situation.

I wasn't expecting to like this book as much as I did, but it's actually a lot of fun. It kind of reminds me of Elizabeth Vaughn's WARPRIZE. The alpha hero is gruff and stoic, but quite kind-hearted and charming in his way. The way he interacts wth his clan results in some great banter. I loved the elders, especially the blood-thirsty Reginald, the cranky Owen, and Lachlan with all of his potently noxious "anti-witch" potions that are also anti-wood, anti-metal, and anti-basically anything organic. And while I'm not always a fan of children in romances, I loved David, too.

The unique characters, action-sequences, and strong women make this a fast-paced and fun read, and I found myself drawn into the story immediately. The scenery descriptions are excellent and in some ways, it follows the same formula that have made a lot of YA fantasy and historical fiction so popular: large casts of likable characters with distinct personalities, forbidden romance, a strong and tortured female lead, and lots of amusing banter. Honestly, apart from the sex scenes (which are no more graphic than one could find in A Court of Thorns and Roses), I think this is a book that would really appeal to older teens as a gateway romance into historical romance books. It's FUN.

I'll definitely be checking out more books by this author.