A Scoundrel's Kiss by Margaret Moore 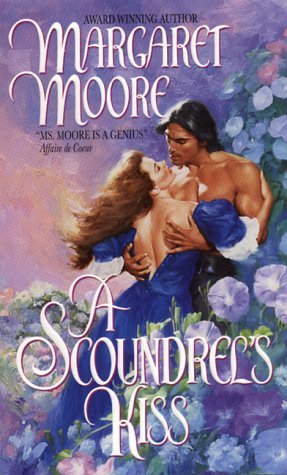 Meh. This is a tough one to rate. On the one hand, it was light and frothy and exactly what I needed after some heavier reads. On the other hand, the plot is all over the place, and the last quarter of the book has a chain of "Guess what? No, guess what? But-- oh wait, GUESS WHAT?" reveals that make all the twists feel REALLY contrived and resolves the story way too neatly.

Set during the Restoration-- not Regency, the people who shelved it that way are wrong-- this story is about a slovenly man named Neville who has been disinherited by his father for living in filth and ignominy, spending too much time gambling and with the ladies. To punish him, his father, the Earl, has decided to adopt a ward and give what would have been Neville's inheritance to her: Arabella, a provincial girl who is the daughter of a fanatic Puritan.

Arabella is not only faithful and good, she is incredibly beautiful. Which is why Neville, after encountering Arabella in the bathroom, decides that he is going to seduce her to make a point to his father that nobody can live up to his impossible standards. He even bets his two friends, Richard and Foz, fifty pounds each that he can convince her to sleep with him.

The story gets a little convoluted with King Charles II deciding he wants Arabella as his new mistress, and King Charles II's mistress deciding that she wants Neville as her new lover, and Neville's father (and his childhood friend and maybe lover, Lady Lippet) deciding that they need to pick out a suitor for Arabella, which results in a montage of parties, dinners, and excursions, one of which nearly ends up in assault, and all of which only serves to draw out the sexual tension and frustrations between the two leads, who just can't. Be. Honest. With. Each. Other.

There were some pretty steamy scenes in this book and just enough action to keep me turning pages, but I skimmed the last couple chapters. Neville really didn't have to grovel all that hard considering all the cruel things he did to Arabella, and as I said, the climax of the book was a bit convenient. I do love the cover, though, and the writing was decent. It was also cool to read a romance that wasn't a Regency or a Victorian. A SCOUNDREL'S KISS was a fun read but not a memorable one.