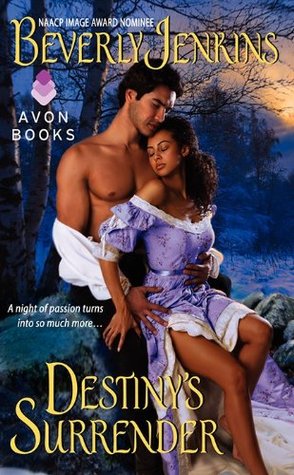 I have mixed feelings about this book and while looking at the other reviews on Goodreads, I came across Christina's, who basically articulated every issue I had with this book. Normally, Beverly Jenkins is one of my favorite romance authors, and to date, I've loved every single one of her books I've read... except this one.

DESTINY'S SURRENDER is somewhat edgier than some of her other books, and I appreciate experimentation when it works out well. Here, the heroine, Billie, is a "lady of the evening" and Drew, the hero, is the man who pays for her favors. She's his favorite, and he pays extra so she'll be exclusive to him when he wants her, and reads to her, and takes her out to the opera, and buys her expensive chocolates, and Billie is more than a little in love with him, even though she knows that things can never work out between them.

When she ends up with child, she doesn't initially know whose it is due to the nature of her profession (something the summary is a little unclear about), and she ends up cutting a deal with her madam that will result in her being able to give birth and keep the child for a year, but after that, she'll have to sell it. Well, the child is born and she realizes 1) it's Andrew's and 2) there's no way she's giving up the baby she loves, so she ends up running away...

So here are a few of the things I didn't like about this book. I didn't think Drew was so great as a love interest. In the beginning, he and Billie had a lot of chemistry, but he is SO MEAN TO HER when she shows up on the ranch and so is his brother, Logan. The only one who really goes out of her way to be nice is their mother, Alanza, although she's become totally grandchild obsessed, kind of like the cabbages guy in ATLA, except instead of "MY CABBAGES!" it's "MY GRANDCHILDREN!" He's even gotten engaged to another woman he doesn't love (although things never fully work out between them), which I know a lot of my friends won't like, since they prefer steadfast heroes.

A lot of the scenes on the ranch moved SO SLOWLY. I ended up skimming a lot of them, which made me sad, because every other book I've read by Jenkins has been fast-paced and full of action. There were some excellent scenes in here, like the one when Billie FINALLY got her revenge (and I was glad she was the one to get it, and her man didn't do it for her), or the getaway scenes, but they were few and far between, which brings me to my last issue.

The tone. It felt so inconsistent. At first, I thought this would be an angsty romance, but then Drew became a jerk. And normally, Jenkins's romances do have an edge to them, but Prince's presence in this book really made this book a lot darker and more vicious than Jenkins's books are typically known for. He was seriously one of the nastiest villains I've encountered in a romance in a while, and his squirm-inducing acts of villainy were a lot when juxtaposed against pastoral scenes of domestic bliss that dragged on and on forever.

Like my friend said, the best thing about this book is Billie: an unconventional heroine, a sharp-shooter, and determined to protect herself and her loved ones at any cost. She deserved better.

I'm looking forward to the next book in the series, which is apparently a romance between Noah, Andrew's younger brother, and a female pirate. It's supposed to be a lot better than this one.