A Virtuous Ruby by Piper Huguley 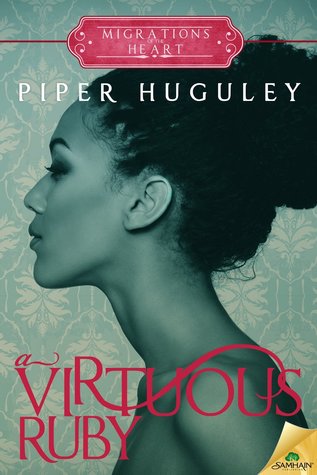 The first book I ever read by Piper Huguley was THE LAWYER'S LUCK, and even though it was a little rough, I loved seeing this perspective on the Civil War, and liked all the excellent points the author made (through her characters) about what it meant to be Black or biracial in the South in the 1800s. VIRTUOUS RUBY seemed to be another book along those lines and, like TLL, it's a historical romance, so I was really excited to read it, as I'd heard great things.

Ruby is a biracial Black woman who is very fair-skinned and can "pass" for white but staunchly refuses. Instead, she uses all of her agency to advocate for the Black people who are working in the local mill, which is owned by a douche in power (I think they're the Winslows, but I can't really remember their names-- I just wanted to punch them all). Mr. Douche in Power sent his son to rape her to punish her for speaking out, which is why she now has a baby with her named Solomon, but Ruby refuses to be cowed, even though her heart is heavy. She's determined to do right by all of the people around her who depend on her.

Dr. Adam Morson is the son of Mr. Douche (also begat through rape). Like Ruby, he can "pass," but unlike Ruby, he has chosen to do so. It got him into one of the best schools and allowed him to complete his studies: opportunities he might not have had if he identified as Black. Now he's returned to see his father, who wants him to be the doctor for the Black people who are constantly getting wounded in the mill. When he meets Ruby, she stops him dead from entering the hotel that is for "whites only," worried that his arrogance will end up getting him killed. Adam stays elsewhere, but is intrigued.

Someone said that this is almost like an inspirational romance, and it sort of is, only the religious angle is less about the characters themselves and more about the role it plays in the community (in my opinion). I'm not religious at all, and I felt like Huguley was using religion here to show how it served (and still serves, in many cases) as a hub for the Black community, and how it allowed for networking and socializing, especially at a time when other opportunities were barred to them. Unfortunately, the church in Ruby's community is run by another Douche in Power, a man named Dodge, who, like Frollo from The Hunchback of Notre Dame, has decided that if he can't have Ruby, nobody can.

I really enjoyed VIRTUOUS RUBY. It was kind of amazing to see how much this author has honed her craft since I read her other (I believe, earlier) work (which is still free to read on Kindle!). In many ways, this book reminded me of Beverly Jenkins's work-- not just because it writes history from that much-needed Black perspective, but also because of how richly researched it was, how strong Ruby was, and how dreamy Adam was. When he stood up for her in that church and delivered that speech, I died a little. I'm not going to lie. I also love how flawed all the characters were. Ruby has so much pride but she uses it as a defense, and it ends up becoming an impediment to her own happiness. Likewise, Adam has a lot of internalized privilege that he is unable to recognize for a while, and it isn't until he starts to really understand and relate to Rub on her terms that he is able to begin to win her.

I also found the topic of "passing" both interesting and horrible. Jenkins writes about that at length in FORBIDDEN, which I loved, and it's handled equally well here. It really highlights all of the cultural erasure that happened in the South (and elsewhere), where people's histories were not just stolen for them or appropriated, but they were also assigned their own identities with racist dictates like the one-drop rule, and horrific consequences for those who decided to "pass" and flip the bird to segregation.

If you're interested in historical romances about people of color, this is a really great one to go with, as I spent huge swaths of it with my heart in my throat, and it shattered me about half a dozen times.