But Like Maybe Don't?: What Not to Do When Dating: An Illustrated Guide by Arianna Marguilis 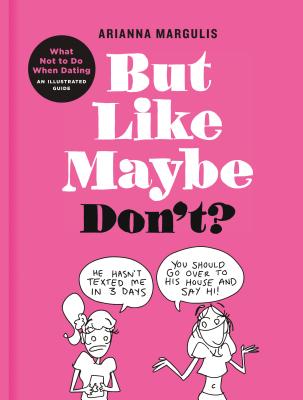 I might be one of the most awkward people you'll ever meet IRL, but this book has made me feel like a veritable Superhero of Chill. I've never had my job transfer me across the country to chase after a guy I just met and I've never created a fake Facebook account to "research" my S/Os, but hey, maybe I'm just naive. Apparently creating stalking accounts is common, and I just never got on board because things like this just don't occur to me. I'd be the worst spy. I'd be out there with a "hello my name is" sticker and on it, I would write "Spy."

Why? Because I'm bad at lying.

BUT LIKE MAYBE DON'T? is obviously trying to follow in the footsteps of Allie Brosh, but instead of being a hilarious, sensitive memoir about depression, this is kind of like a dating guide as written by a post-college Lizzie McGuire. Some people seemed to think this book was really funny, but it was like half-humble brag, half cringe. Mad respect to people who can be this honest about themselves with perfect strangers, because the story about how she tricked her (high school?) boyfriend into matching outfits was pretty yikes, and my eyebrows shot to my hairline when she recounts feeling like Pretty Woman while dating an actual prince. (Yes, a prince! Which one??? There aren't that many...) Also, the Hamptons are mentioned like twice, and one of her dates was an Ivy,

I do like the constant validation, and if this was meant to be cathartic, then that serves a purpose, too. I just personally didn't find this all that funny, and most of the advice wasn't all that useful to me because I don't really have any of these problems. Actually, now that I'm thinking about it, reading this book was a lot like reading the advice columns in my teen girl magazines, where the questions that got published were always problems that a) either nobody but like maybe (ha!) .001% of people would have, or b) problems that everyone has but answered in a way that tells you what you want to hear but that you also know is unhelpful and probably wrong (kind of like your dentist saying "yes, candy is great for your enamel-- eat all the candy!" Like yesss, please, but also, seems like a lie).

Since this is a book about bad dating anecdotes, I will share one of mine. I had been dating someone for a few weeks and they didn't invite me over for Thanksgiving, which hurt my feelings a little, but I was also kind of like, "Well, Thanksgiving is a big step and some people have extended family over, so bringing a new girlfriend to be interrogated by Grandma Mildred and all of your extended cousins can be super awkward (true story)," so I didn't really think much of it. A few months go by and I'm like, "Hey, babe, what are your plans this weekend?" And they were like, "Well, I can't see you because I'm having my birthday party and everyone who's important to me will be there." And I waited. And there was no qualifier. So I was like, "Hmm, okay." And then I broke up with them the next day. By text.

Because a girl's gotta have some self-respect. Or a boy. Or a non-binary individual, too.

A less sad but more amusing story is this blind date I went on with this dude who had clearly padded out his resume because what he told me he actually did was very different than the career he had listed on Facebook. That isn't a deal-breaker in and of itself, because I respect the hustle, but then it turned out that he was probably a Trump supporter (he didn't come out and say it, but he might have uttered the phrase "both sides" and said something against affirmative action, so I kind of knew) and rather than rushing out of the restaurant right there, I took the opportunity to spend the rest of the date talking about feminism and how important diversity was, and why I loved living in San Francisco.

Spoiler: he didn't offer to pay for my water and app. He wanted to network, though, and when it became clear that wasn't going to happen (hahahaha), I never heard from him again. In fact, he blocked me on all social medias. I call that a win.

Anyway, not sure who this book is really supposed to appeal to, but probably teenagers who watch Sex and the City and still think BuzzFeed is "fire." I think I'm too old and uncool to appreciate this book.