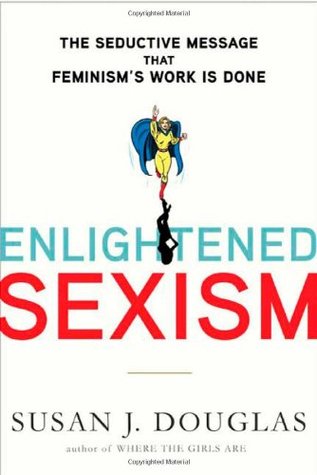 Keep in mind while reading this that this book was published in March 2010, which probably meant that the author was working on it for at least a few years before that. This is important because ENLIGHTENED SEXISM does read as being very dated, both in terms of references, who it's written for, and what it's addressing. Had this come out today, it would be laughably tone-deaf, because during several moments in this book, the author reverts to objectifying language herself, and, save for a chapter on Black women titled, perhaps unwisely, "You go, girl!", does not really feel all that inclusive in how it addresses intersectionality. "Where are the lesbians?" the author asks, rhetorically, in the reality TV segment-- ignoring an opportunity to talk about how bisexual women are fetishized on TV (A Shot at Love with Tila Tequila was definitely out when this book was published), and how trans women and queer women are often portrayed as glaring caricatures (when they're portrayed at all).

ENLIGHTENED SEXISM is a book that I was eagerly anticipating because I am a feminist and I guess, being a book blogger, I'm somewhat of a pop cultural critic-- at least, in that I read things that are famous in the spheres of pop culture and then I comment on and critique them. I've not been trained in professional criticism and I've never taken a women's studies class; everything I know has been taught to me, from friends, fellow bloggers, and authors of books and articles, and I am still constantly learning. The most important and meaningful takeaway that I've gotten thus far is that it is incredibly important to be mindful about what you consume, and how, even-- maybe especially-- if you love it.

In ENLIGHTENED SEXISM, Susan J. Douglas attempts to do just that, dismantling many forms of media-- movies, TV shows, commercials, billboard ads, reality television-- and talk about the conflicting messages that we, as consumers get: that we're told that society is equal and feminism is somehow unwanted or redundant, even as the subtext in many popular movies, TV shows, etc. involves the portrayal of a world that revolves around cisgendered heterosexual white men, where everyone-- even the rebels-- have to play by their rules in order to win. This is an important message, especially now. You see a lot of people online trying to steer the discourse away from critical movements in social justice, arguing that to put the spotlight on a group is to steal it away from someone else. I can't tell you how many times I've seen people say, "I don't believe in feminism, I'm an equalist." Or they get freaked out, because they think that believing in Black Lives Matter means that their (not-Black) life doesn't matter. What these people don't realize is that negating the group from the name of the movement negates the movement. It's like there's a house on fire, and a fireman comes and sprays the hose on the house next door. And the person who owns the burning building is like, "My house is on fire! Why aren't you doing anything about this?" And the fireman says, "All houses matter."

All lives will never matter until Black lives matter. And society will never be equal until women and non-binary individuals have the same privileges as men do.

Hilariously, the person who owned this book before me was very conservative and took copious notes, suggesting their lack of respect for women and millennials, and bewildered by terms like "MAC" and "BET." Their comments ran the gamut of things like "why would you trust the media?" and "I haven't watched television since the 90s!" and "success and bitchiness go hand and hand" and "if you believe that, you're stupider than most women are." It's frustrating, because this is exactly the type of book that conservatives love to hold up as a strawman argument for how silly feminism is and, ironically, in my opinion, does exactly what Douglas criticizes the token lesbian character of being set up to do in Legally Blonde (i.e. superficial attacks against inconsequential facets of The Man).

The main argument of this book is basically what Gillian Flynn said so pithily in her oft-quoted paragraph about "cool girls." We're seeing more powerful, kick-butt, influential women in the media, but they are being repackaged in ways that renders them non-threatening to the status quo. Black women are expected to code-switch and behave in ways that don't make white people feel threatened or racist. Powerful women are portrayed as beautiful and vulnerable, which makes them seem attainable and desirable instead of threatening. Reality TV and soap operas perpetuates outmoded sexist stereotypes, but do so while winking heavily at the audience in a way that implies that they're somehow postfeminist, because surely, it's okay to say such things if it's all occurs in a vacuum, etc.

The problem, which isn't so succinctly summed up in this book, is that we don't consume media in a vacuum and our brains are wired in a way that makes us rely on shortcuts, like stereotypes. If we grow up consuming media filled with problematic stereotypes, those problematic stereotypes are what are going to be readily available when we think about women, people of color, etc. This is just one reason why having good rep in diverse books and other media is so important: it portrays society as it actually is, with fleshed out, dimensional characters of diverse and varied backgrounds that are more than just hollow stereotypes. Instead, we're peppered with shows that sexualize women, sometimes even while claiming to empower them, and often put people of color in stereotypical roles.

I'm going to talk briefly about the "You go, girl" chapter, but I'm not Black, so this isn't really my lane. Two quotes in particular bothered me:

"[Code-switching] was one of the great pleasures of the show [Living Single], for white audiences as well as for blacks, because here we gained access, however vicariously, to the truth-telling world of snap." (Emphasis and bold mine.) Um, yikes.

Code-switching in this book is portrayed as this fun thing Black people do on TV show to play up the audience for laughs. The author does at one point mention that it's a mechanism for juggling identities (paraphrased, since I can't be bothered to look up the quote again). From what I understand, though, the deeper purpose of code-switching is because Black people are expected by white society (and Black society, in some cases) of behaving differently in situationally dependent contexts, and are constantly having to recalibrate based on whether they're "white enough" or "Black enough" at a given moment. It is not a fun, quirky thing. It is a behavior that society has forced on people of color, due to ingrained, racist stereotypes that are embedded in the architecture of society as part of the status quo.

The other quote is this:

"[Oprah's] effortless glide into Black Speak is endearing and almost always gets laughs. It also reminds white viewers that, as a black woman, she has a unique vantage point in white America and a special community membership that they don't. But she's going to let us in." (Emphasis mine)

Here, I think the author tips her hand a bit. She's definitely writing for a white audience, in my view. But it makes this chapter extra uncomfortable, particularly since while she does criticize the "sassy Black woman stereotype" in media, and rightfully points out that often, when Black characters do appear on TV shows, they exist in isolation from Black culture, and issues of social justice and inequality, like BLM or serious conversations about racism and prejudice, she fails, in my opinion, to really point out the other problematic portrayals of women of color, like fetishization or existing to validate white people, and her critiques of BET, rap, and back-up dancers felt like it was detracting from, rather than adding to, her arguments for intersectionality.

Regarding the broader message of this book, I felt like it was mostly unsuccessful. I think this works better as a work of pop culture essays than it does about feminism, since it's mostly a collection of what the author likes and dislikes on TV and in media. It's well-written, but it doesn't really feel like it has a solid scholastic backbone, particularly when she's describing Victoria's Secret models as "Barbies" and "ectomorphs" and railing about how much she hates Abercrombie and Fitch. Women on women hate is a significant part of one of her chapters, so it feels weird and kind of hypocritical to see such catty asides in an essay that's supposed to be arguing against them-- especially since one of them is under a photo caption in the middle of the book, and therefore pretty hard to ignore. Even if she's being facetious, it doesn't really strike the right tone given the overall context and ambitions of the work.

As I said, though, this is about a decade old. I feel like this author was coming from a good place and it's unfair to criticize with the advantages of hindsight. I was pretty uninformed ten years ago, too (ten years ago, I was in college, and thought some pretty questionable things about the world and how it worked). Feminism is becoming more inclusive and white, cisgendered women are finally getting up and developing the vocabulary-- and the empathy-- to discuss and support issues pertaining to the LGBT+ and women of color, which white feminism can often overlook or ignore (or, in some cases, dismiss and even work against). That said, I don't feel like this book ages well, and it's weird to read a book that talks about pop-culture and feminism and doesn't mention the Kardashians or Taylor Swift. Instead, it's all about Laguna Beach, Abercrombie, Victoria's Secret, Jamie Lynn Spears, Miley Cyrus, and Oprah. Honestly, it's almost worth buying just for reliving the pop-cultural who's-who of the 2000s, which, again, makes me feel like this would be better marketed as pop-culture essays and not feminism.

I ended up skimming a lot by the last third, as I felt like the author had made her point. I wouldn't recommend this or read it again, but I would like to see an updated (shorter) work of essays by this author about her thoughts on pop-culture and intersectional feminism now.