My Fair Concubine by Jeannie Lin 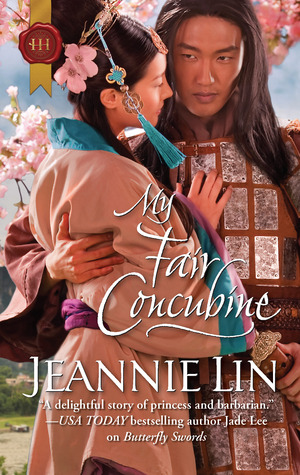 This was so, so, so close to being a three-star read for me. I am such a sucker for Pygmalion retellings, especially ones-- like these-- that subvert the misogynistic elements of the original story. Set during the Tang dynasty (which would be around Early Medieval period in Europe), the Tang Dynasty series are a set of Harlequin Historicals with interrelated characters navigating custom, danger, and love.

On the surface, each of these books sounds like something I should love. But the first book in the series was a DNF for me because it was so slow. This book, MY FAIR CONCUBINE, is much better... until it gets to the second act, where it suddenly slows down-- until the ending, which feels very rushed and tacked on, and ultimately unsatisfying.

I don't think this is a problem exclusive to Jeannie Lin. I have read other Harlequin Historical imprint novels, and all of them feel very much like Reader's Digest versions of romance novels. Everything feels very sanitized and safe, and there's a slow, distanced element to the writing that seems to be a unifying theme among all these books. I really don't like it, but it seems to be the style that this publishing imprint prefers and cultivates, sadly.

Despite that, I read MY FAIR CONCUBINE, hoping for the best. Because of the premise! And that cover! That GORGEOUS cover. Yan Ling is a very likable protagonist. She works in a tea house, selling tea. One day, she gets angry at an entitled, rude customer and throws tea on him. This is Fei Long, who is bemoaning the fact that his sister, Pearl, has run off with some rando in the name of love, and never mind that she was supposed to be engaged to the lord of another kingdom. I know, right?

When he spies Yan Ling, he gets an idea after the tea begins to dry. She's pretty. And even though she has a temper, he could train her to master all the customs a princess should and prepare her for the ceremony. It's only two months but hey, that's plenty of time to teach someone how to walk, read, and speak like a princess, right? RIGHT? I mean, Meghan Markle did it.

So Yan Ling undergoes princess lessons but Fei Long slowly begins to fall for her and pretty soon, it's almost time for the marriage but both of them are super attracted to each other. There's also a hilarious actor named Bai Shen and a servant named Dao who are helping out Yan Ling with her princessing and are also the comic relief duo of this book, and to be fair, they do serve that purpose well. Bai Shen deserves an entire book of his own, to be honest. He cracked me up.

As I said, there's nothing really wrong with this story. It just moves really slowly. The beginning is great. The characters just didn't have much chemistry with each other-- I honestly felt like Fei Long and Yan Ling had more of a brother/sister best friend dynamic than as love interests, and when they finally have sex with each other, it felt... weird. Especially since, as my friend pointed out in her review, all the sex scenes come at you, one after the other, before that hastily tacked-on ending.

I'd love to see more of Jeannie Lin's work-- maybe self-published? I wasn't a fan of Courtney Milan's traditionally published works, as an example, but once she went solo and started taking the risks she wanted to as an indie author, I felt like she really began to shine. I feel like Jeannie Lin has some really fantastic ideas and I'd love to see what she can do when she can do literally anything she wants.