Traded to the Sheikh by Megumi Toda 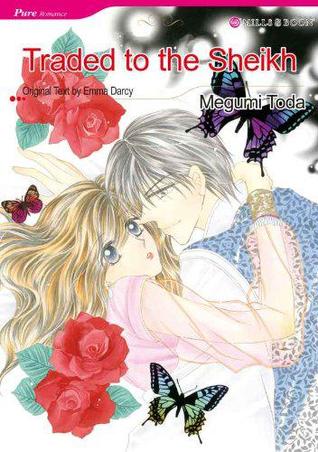 Sheikh romances can be incredibly problematic because of how they propagate and uphold negative stereotypes about the "barbarity" and "exoticism" of Middle East, which seem to be a holdover from 19th and 20th century obsession with Orientalism. It's not typically a subgenre of romance I seek out, but once in a while, I end up reading them anyway. TRADED TO THE SHEIKH was part of a big sale on Harlequin manga, which I just couldn't resist. Especially with the cover covered in butterflies that seemed like early 2000s shoujo.

The plot of this one is a little silly. Emily is traveling to Zimbabwe by way of Zanzibar to save her sister from a politically unstable environment. She accepts passage from a French trader in exchange for working as part of his crew, not realizing that he's actually a smuggler, and a spineless creep who will sell her out the moment he gets caught. Which is exactly what happens when a sheikh catches them at a port he controls and is none too pleased with the drugs.

At first the sheikh, named Zageo, thinks that Emily is in on it as a concubine (he finds a belly dancer costume in her things). But then he checks out her passport and does some investigating that leads him to believe her story. He's also moved by her concern for her sister and ends up making steps to save her family, but Emily doesn't know this and ends up offering him her body in exchange for her sister's safe passage, insulting them both.

So this was fine. This is actually the nicest sheikh I've ever read about, to be honest. He's not a jerk and seems to genuinely care for others. That was kind of refreshing. But I'm not happy about how the author (and the mangaka, acting as her proxy) avoided the traps that normally plague sheikh romances: she just omitted the location and any semblance of culture at all. We never find out where Emily actually is, or what Zageo is the sheikh of, and we never see any of his people. Zageo is the only one who ever shows up in traditional dress, and the rest of the time he's usually in suits or a t-shirt.