The Black Castle by Les Daniels 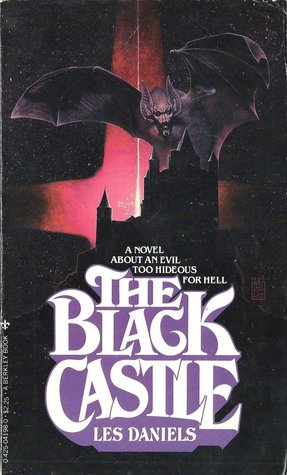 With October looming, I feel like it's time to break into the spooky Gothic reads, and what better way to crack open the creepy champagne bottle than with an old skool book about vampires who don't sparkle, who sleep on their native earth and can't come into your homes unless invited, set against the grim and gruesome backdrop of the Spanish inquisition?

THE BLACK CASTLE is about two brothers. Diego is an Inquisitor who hides his own morbid fascination with cultish ephemera in his pious devotion to burning heretics. While this book isn't too gory, the book does describe how people were tortured in the Inquisition, and the author makes no attempt to downplay the rampant antisemitism that allowed people to act on and benefit from their hatred of those who were different from themselves, sometimes for incredibly self-serving reasons.

Sebastien, on the other hand, is a vampire who lives in his dark tower. The eldest son, who died in the crusades and then came back as an unnatural terror. Diego knows he lives, and benefits from his existence in an attempt to further his own glory. Which begs the question-- given their mutual blood lust, which of them is the real monster?

The beginning of this book is much better than the end. The synopsis of this book would make you think that this is a romance, kind of like Chelsea Quinn Yarbro's books, but it isn't really a romance and the ending is as grim and devastating as the beginning. That said, I don't think it could have ended any other way-- and if you think you know what I am saying, you probably don't. I wasn't expecting it. I do wish the pacing had been a little more consistent, as it dragged until it didn't, and ended with a bang.

THE BLACK CASTLE focuses on traditional vampire lore, and the emphasis is more on the historical elements than the fantastical ones. It does have some interesting things to say about mortality, faith, and hypocrisy, and one of my favorite scenes in the book is a Tarot card reading that takes place in the castle. It literally sent chills up my spine. If the book had more scenes like that, it would have been an easy four- or even five-star read, but because of the pacing issues, I'm deducting a star.