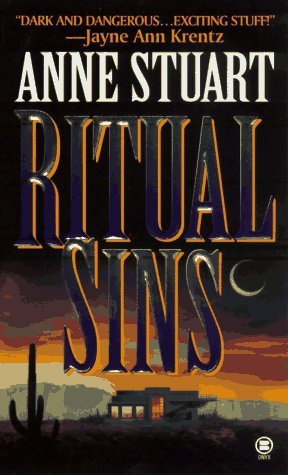 I definitely have a reputation on here for liking dark heroes, which I think surprises some people, since I do have strong feminist principles. My feeling is, people should be able to read whatever they want as long as they treat everyone with respect in the every day and don't espouse the principles of what they read. At the end of the day, it's fantasy, and real feminists don't tell other feminists what they can and cannot read. I mean, really. At the end of the day, you like what you like.

Anne Stuart is one of my favorite authors, even though all of her heroes kind of feel like the same person wearing a different hat. She always delivers on the dark, cold, arrogant, and aloof type of hero, although some are more sinister and cruel than others. This is the first time I've ever read a romance novel with a cult leader as a hero, and it was pretty disturbing. Luke is exactly what you picture when you think of a seductive and manipulative cult leader. He's also a murderer and an ex-con, so, you know, not a very nice man. He also straight up rapes the heroine, who is a survivor of abuse already, so instant deal-breaker for some.

Rachel meets Luke because she's come to seek answers about her mother Stella, who died from cancer at Luke's compound after donating 12 million dollars of her fortune to the spiritual organization. There's no lost love between Rachel and Stella, who is an awful woman, but Rachel wants her money and she hates Luke. Luke, of course, taunts her, mocks her, and uses all of her weaknesses against her. He takes a specific pleasure in making her cringe and suffer that's really quite depraved. This is definitely a man who I want to stay firmly between the pages of this book and never ever find me in real life, even though the sex scenes between Luke and Rachel are pretty scorching.

I debated on whether to give this book a four or a five. There were some really weird and uncomfortable moments between the H and the h, not just with the nonconsensual stuff, which was definitely bad, but also some weird comments about babies. I did really, really like the parts about the cult, though, and the surrounding mystery turned out to be so much more twisted than I expected. It reminded me of one of her other books, NIGHTFALL, which was also profoundly disturbing.

If you like Anne Stuart and dark heroes, you'll love this. If you're used to softer, gentler reads, and would be turned off by anything I mentioned, you'd be better off avoiding this one.