The Return of Nightfall by Mickey Zucker Reichert 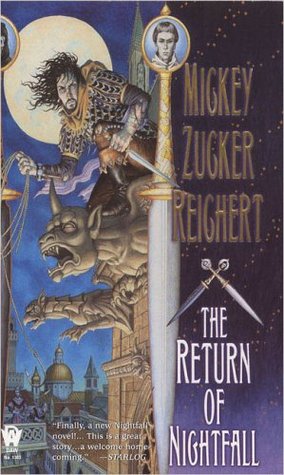 I binged the Nightfall series in just two days. The first book, THE LEGEND OF NIGHTFALL, was published in the early 90s and the sequel was published over ten years later. Even though the first book definitely reads as a completed work, there's obviously an open ending for a sequel, which is where THE RETURN OF NIGHTFALL comes in.

Nightfall is a legend, a story parents tell their children to scare them at night. He's also a man who goes by many names and many guises. His current incarnation is Sudian, which is also the name he was given at birth. After saving a sanctimonious and naive king named Ned from the previous book, Sudian has been appointed to chancellor and is engaged to be married to his one true love. Things seem pretty sweet-- until Ned announces that they have to go back to make reparations to a Duke they wronged in the previous book by compromising his daughter's honor.

This being a fantasy novel, things obviously go awry. Nightfall gets pushed into hunting sorcerers to fulfill a promise that he made to break a curse. Sorcerers in this book are pretty terrifying. In Reichert's world, people can be born with "gifts," but sorcerers are born with a hunger for power that drives them to kill and slaughter the gifted to augment their own powers. The best way to steal those people's souls is to torture them first, which ends up leading to some horrific off-screen events. Being gifted and personally wronged and hunted by sorcerers, Nightfall obviously isn't overfond of them.

When he gets back from the hunt, he finds that Ned has been kidnapped, seemingly spirited away. What follows is a quest to not only track him down but also to navigate some pretty insidious court intrigue that involves a Gordion knot of policy and bureaucracy, dangerous and dashing pirates, evil slave-drivers, evil sorcerers, and lots and lots of reconnaissance and espionage. I think if you're familiar with Janny Wurts or Mercedes Lackey, you'll know what to expect with this author. Even though this can be a dark world, with people who have dark hearts, most people are just ordinary human beings trying to survive in it, and good usually triumphs over evil (although not always, and not at first).

One of the things that I found so charming about this author's work, which actually propelled me to buy all of her fantasy novels, including the unrelated Renshai trilogy, is her incredibly detailed world-building and the complex intrigue. She's so good at foreshadowing and I think her character-development is amazing. Despite being written a decade apart, the books feel pretty consistent and I wouldn't have guessed there was such a gap. The open ending of this book makes me wonder if maybe a third book is going to be forthcoming-- I mean, hey, it's been over ten years. *wink*

I'm giving this book a slightly lower rating than the first because even though I really enjoyed it, it felt denser and didn't move quite as quickly. The beginning took a while to get moving and there were several points where there just wasn't enough happening to make this feel as engaging as I wished. I loved the ending though, and Volkmier and Celdurant ended up becoming new favorite characters. I am so excited to dive right into her other fantasy works. It pains me that this author isn't more well-known.