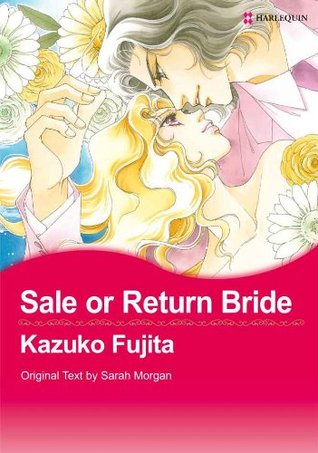 Just as a frappuccino is a brilliant blend of a milkshake and coffee, Harlequin manga combine the bite-sized addictive nature of comic books with the compellingly luxe and trashy nature of romance novels. Whenever they go on sale, I always end up buying way too many of them. Love them or hate them, they're so much fun... but sometimes consuming too much of them, too fast, can lead to brain freeze-- or worse, a belly-ache.

SALE OR RETURN BRIDE is based on the romance novel of the same name written by Sarah Morgan. Set in Greece, it's about a girl named Alesia who is the daughter of a ruthless business magnate who has thought of the perfect revenge against his young rival. He will marry his daughter to his enemy, Sebastien, knowing she's barren, and that marrying her will mean the "end of his line."

So the two of them marry and Sebastien enters the marriage thinking that his new wife is a money-grubbing party girl. But Alesia isn't very good at hiding her true nature and pretty soon Sebastien begins to suspect that he's been party to a ruse. Alesia needs to be in the marriage because her mother was injured in a near-fatal accident and she needs the money to pay for hospital care. But pretty soon she begins to care about Sebastien, too, despite knowing she shouldn't.

Ugh. So this was kind of a dumb story. First, the whole "end of his line" thing was so dramatic and lame. One, because it perpetuates the idea that a woman who can't have kids is some sort of shameful, awful burden that a man must bear and two, even if it was problematic enough that he'd want to break the engagement, he could always... adopt? Also, I hate-hate-hate the "miracle pregnancy" ending. It's so gross and ableist. The text was also very small and looked ugly. It felt like the manga had just been slapped together and even though I liked the art, the presentation was sloppy. The heroine's name was also misspelled multiple times, switching from Philipos to Philibos and back.

Not really a fan of this one.