Columbella by Phyllis A. Whitney 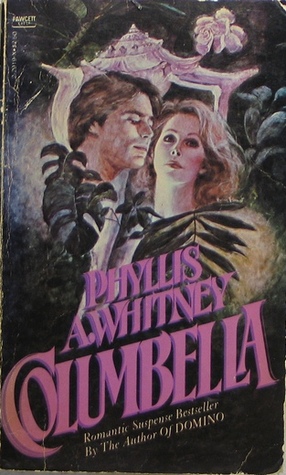 Phyllis A. Whitney is probably my favorite Gothic romance writer that I've ever read to date. While a lot of her contemporaries could come across as prudish, dated, and problematic when reading them today, I've found that the exotic locales in Whitney's books always seem incredibly well researched (she wrote a really dark one set in Japan), her rep of people of color holds up mostly even to this day without too many ridiculously over-the-top stereotypes (even the ones published in the 1980s and before), and her heroines are usually strong and intelligent.

Reading the abridged biography of the woman in the backs of the ebooks, this doesn't really come as a surprise, though. Whitney grew up in Japan and traveled extensively, researching her locations on site, such as going on tour in the Virgin Islands (as mentioned here), flying in a helicopter over Hawaii for SILVERSWORD, and even going up in a hot air balloon for one of her other books. Her unconventional upbringing, travel, and the privilege she had to do all these things really translate to her heroines, who are open to new experiences, and tend to be no-nonsense but also empathetic and interesting in a way that Victoria Holt and Dorothy Eden's heroines are, well, not. I love her.

COLUMBELLA is no exception to the "Phyllis A. Whitney is awesome" rule. Set in St. Thomas, in the Virgin Islands, it is about a governess named Jessica who has come by request of the family matriarch, Maud, to the Clair/Drew family to look after their youngest family member, Leila, and put some sense into her. As it turns out, Leila is the pawn in a bitter war between all of the younger family members. It's a little confusing, so I'll lay it all out for you. Maud has two daughters, Edith and Catherine. Edith is the matronly sister, in an unhappy marriage of her own with Alex, a man who sells and collects exotic seashells and has a wandering eye.

Catherine is the beautiful sister and lets no one forget it. She's also a thrill-seeker, narcissistic, impulsive, and vengeful. Her husband is a man named Kingdon, although they're probably going to separate at some point, since there is no love between them. They have a daughter, Leila, and Catherine has mostly succeeded in turning Leila against her father. Kingdon wants to get Leila out from under Catherine's influence and send her to his sister in Colorado, but Maud knows that if Leila is forced to leave, she will leave idolizing her mother and despising her father in her heart.

So the burden falls to Jessica to "fix" things.

I thought the shell angle was really interesting and it was really cool to read a book set in the Virgin Islands, even though there are some gross throwaway lines about the history of its colonizers and plantations, and how some of the characters long for the glory days of having people-- slaves-- to manage and obey them. Some books ignore where the characters get their money, but not this book. It's very uncomfortable but I think it's supposed to be, and considering when this was written, there were still people around, old people, who were alive and old enough to remember a time when people owned living human beings and exploited them for profit, and some of the racist ones probably did miss it.

Gross, but it added a touch of grim realism to the otherwise beautiful setting.

The drama in this family had me turning pages like nobody's business. Catherine is absolutely awful and the way she treated her daughter alternately like a pet or a rival was disgusting. Kingdon, the love interest, wasn't really attractive to me because he comes off as incredibly patriarchal and also he's married, although his wife was openly seeing other people, which made it feel less bad to me when he started to become attracted to the heroine. I found all of the side characters equally interesting, and thought the portrayal of Leila was pretty realistic to how a teenage girl at the time would behave.

If you like Gothic romances but are tired of the typical "woman moves to a manor home in the English country side and finds out it's sus" plotlines, Whitney's are such a breath of fresh air, because they're literally set all over the world, and the plots are always so interesting and unique.