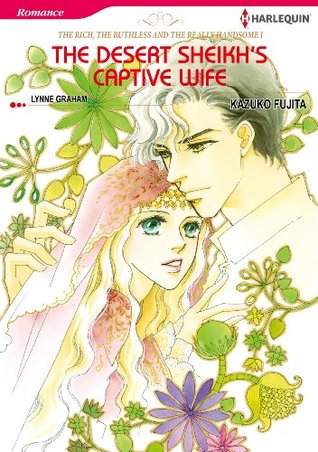 Literally just last night I was saying that I had never read a good sheikh romance. Well... I am prepared to eat my words. This one, which is based on a novel by Lynne Graham (and actually has okay reviews), is trashy as all get out, and all of the usual complaints about sheikh romances (cultural erasure, orientalism, lack of research) apply, but this one has a really fun Hana Yori Dango vibe, from the personality of the hero and heroine, to the writing style, so I was actually really into it.

Tilda was a student working at a nightclub in Oxford when she met Rashad, Crown Prince of a Generic Middle Eastern Country Wearing a False Mustache (GMECWaFM™). They started dating, and their affection for each other was pretty intense, but then he abruptly broke things off. Now, with Tilda and her family about to be evicted from their home, it comes to light that Tilda's mom borrowed 500,000 pounds from Rashad while the two of them were together, which seems to have made her think that she was only after his money.

When she goes to him to plead her case, and offer to somehow replay the loan, he tells her that she can repay it with herself... which initially infuriates and sickens her, but then she's like, "Actually... even though he's a jerk, this is a pretty great deal." Which is surprisingly progressive. I mean, it is just sex, but so many of these romance books instill the heroine with a ridiculous sense of honor about their purity. Anyway, they go off to GMECWaFM™ where Rashad puts her into an empty harem (a joke: he initially led her to believe that she would have competition), but before things can get cereal, they get complicated fast, because it turns out that Rashad accidentally married her due to a technicality.

So, THE DESERT SHEIKH'S CAPTIVE WIFE gets points for (1) having a hero in pursuit who does not come off quite as a Draco in Leather Pants. He has a real (albeit sexist) reason for being upset with the heroine, and I liked that the heroine had backbone and sense. Unlike some of the heroines in these romances, where I'm like "what does he see in here???" I could definitely see the appeal. And while I feel like this book is definitely an example of culturally appropriation, it never quite crosses the line into bald-faced racism, unlike some books, which have cringe-worthy depictions of Middle Eastern culture and likenesses. I did raise an eyebrow at her wedding dress, though, which seemed to be a pastiche of Asian, South Asian, and Islamic wedding dresses, specifically Indian, Japanese, and Moroccan (and yes, I did spend about an hour Googling wedding dresses as research for this review-- trust me, it was time well spent).

If you want to read sheikh romances that won't make you want to bang your head against the wall, this isn't a bad one to start with. I'm thinking I need to hunt down Lynne Graham's work, because if she can make something as problematic as a sheikh romance palatable, I'm pretty sure she can do anything.

As a side note, if you're more interested on the reasons why sheikh romances are innately problematic, I delve into that at length in my reviews of PRINCE HAFIZ'S ONLY VICE and E.M. Hull's THE SHEIK.