The Legend of Nightfall by Mickey Zucker Reichert 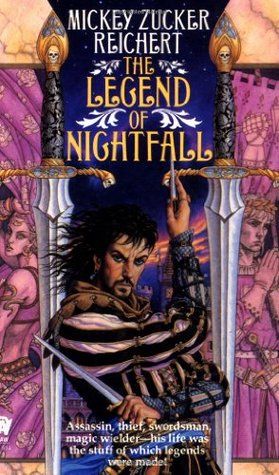 I'm finding that I'm a total sucker for the "rogue liberated from prison to fulfill some sort of daunting task" trope. It's why I love books like POISON STUDY, THE THIEF, and THE MIDNIGHT LIE. There's just something so richly rewarding about seeing someone being granted a second chance, even if that second chance comes with major strings attached. When I read a book, I like having someone to root for.

Sudian, our hero, is such an amazingly complex hero. I've never read about a fantasy character quite like him. He's a notorious rogue, assassin, thief, and knave, feared throughout all the kingdoms, with as many faces as a octahedral die. When he's brought to the king of Alyndar, he basically assumes that it's his neck on the block-- and it is, only not in any usual assassination. Instead, the king's chancellor (who is also a magician) binds Sudian to a magical Oath. He can't take on any of his nefarious past activities, cannot harm any member of the royal family of Alyndar or its councilors, and he must act as squire to the king's youngest son, Prince Edward, and succeed where all his past scholars and squires failed: see that he graduates from the school of hard knocks and gets landed.

Landing, in this book, means getting land. Because a noble just isn't a noble if they don't have something to lord over. And Edward is way more frustrating than any noble that Sudian has encountered. Not because he's a terrible person-- but because he wants very much to be a good person. He wants to singlehandedly take up the cause of every disenfranchised person in the empire, whether it's slavery in one of the outer countries, or giving money to beggars in the streets, but his privilege and upbringing blinds him to the changes he could easily make in his own bearing and behavior, and Sudian is exasperated and annoyed by turns when Edward thinks nothing of sending him back out in the rain for many miles to retrieve a lost shovel, or casually gives him orders with the expectation that they'll be followed because that's simply what's done.

Ned truly does have a kind heart though, and this ends up almost feeling like one of those buddy movies, as Sudian begins to see how Ned could be an amazing man-slash-ruler in his own right once he literally gets off his high horse and starts paying attention to people on their own terms and not just as causes that he can take up to glory in his own perceived virtue.

Sudian is also a really fascinating character. First, major props to the author for her portrayal of someone who was warped by psychological abuse. Sudian's mannerisms and way of thinking are totally shaped by what his mother did to him as a child, and it's heartbreaking-- especially once he finally begins to feel safe enough to trust others and let a select few in. He's also incredibly clever and I liked that he was short and wasn't described as being particularly attractive (even though I think the guy on the cover of this book is quite attractive); everyone who likes him likes him for his compelling personality and unique set of skills. unlike 99% of alleged kick-butt heroes and heroines, Sudian can walk the walk as well as he can talk the talk.

I'm honestly shocked that more people aren't clamoring over this book, to be honest. It reminds me of books I've read by Janny Wurts and Mercedes Lackey, set in worlds where bad things sometimes happen, but they aren't grim-dark, and all of the characters (including the women characters) are fleshed-out and interesting in their own way, and the adventure of the journey is as good as the destination. I loved the ending of this book and can't wait to read the sequel (which I've already bought). You can get both for $2.99 on Kindle as of my posting, so what are you even waiting for?