This Is Kind of an Epic Love Story by Kacen Callender 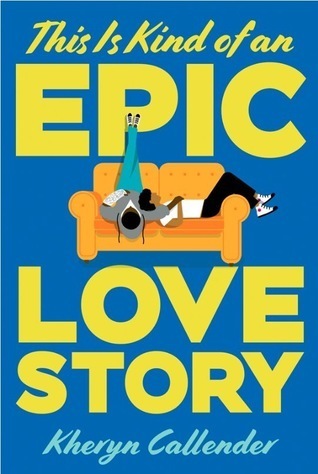 THIS IS KIND OF AN EPIC LOVE STORY is such a good book and it makes me sad that the average rating for the book is so low on Goodreads because I read it in just over a day and loved it so much, even if I do think I understand why so many people seem to have a hard time loving it (more on that in a minute). In some ways, it kind of reads as the prototype version of FELIX EVER AFTER, only with younger characters, but it's also a really great portrayal of diversity, realistically dramatic and tempestuous teen friendships, and the trials and tribulations of first love, so it does stand on its own.

Nate is an aspiring screenwriter who's painfully single. Ever since his dad died, he's had trouble forming close bonds with others because he's terrified of loving and losing again-- after all, everyone has to go away sometimes, why open yourself to hurt? It causes him to push people away and make bad decisions, even though you can kind of get where he's coming from, and how he's dooming himself with his behavior.

He has a close-knit group of friends, which includes his ex, Flo, who cheated on him with the girl she's now dating. There's also Ashley, an aggressively go-getter Hermione Granger type, Gideon, a jock, and, now, Ollie, the "new kid" in school who was actually Nate's closest friend as a child... until Nate kissed him on the day he moved away, which made everything awkward, and caused them never to speak again.

There really isn't a plot to this book, apart from teen boy is awkward and anxious, teen boy meets teen boy who is also awkward and anxious. Boys fall in love but keep messing up because they are bad at communicating with each other because teen boys are gonna teen. Some people complained about the drama and yes, there is a LOT. Everyone has histories with everyone and there's a lot of cheating. Normally, I hate cheating in romances, but I feel like it works better in stories about high school and college because we all know that most of those relationships DON'T last forever, and sometimes falling out with someone you used to like or even love is part of an adult journey. I've said in other reviews that I don't question teenagers making stupid decisions if they make them for believable reasons. There's a difference between a bad decision on behalf of the character and a bad decision on behalf of the author writing as that character, and here, all of the characters felt very real and believable to me.

I loved the diversity of Nate's friend group. Both heroes seem to be either bi or pan (I couldn't really tell, but it seems like both of them have dated or been interested in girls). Ollie is Latinx and I think the hero is Black. His friend, Flo, is Taiwanese and Black and also bi/pan, and I think Ashley and Gideon are white and straight. Ollie is also HoH (hard of hearing) and even though I don't believe this is ownvoices in that regard, it seemed very respectfully done. I liked the signing on the page, and how communication style between him and the other characters was inclusive and respectful and focused on Ollie's needs. I also liked how grief was approached, and how a big part of the story was about Nate's mom sorting out some of her own unresolved psychological trauma, and how a big part of the narrative arc between Nate and his mom was about communication and her learning to let him go.

THIS IS KIND OF AN EPIC LOVE STORY can be a really frustrating read at times because Nate does not always make the most likable decisions, and sometimes you, the reader, will get really mad at him. But the way he behaves is consistent to his character and it makes watching him learn and grow so much more rewarding as you watch him lower those prickly walls of his and learn to let others in. I think anyone who enjoys YA with topics geared towards older teens (sex, first time, relationships, long-stance relationships, college applications, internships, career decisions, grief, friend drama, etc.) will really enjoy this book, as it ticks a lot of the boxes of what I personally look for and love in YA.