Your Republic Is Calling You by Young-Ha Kim 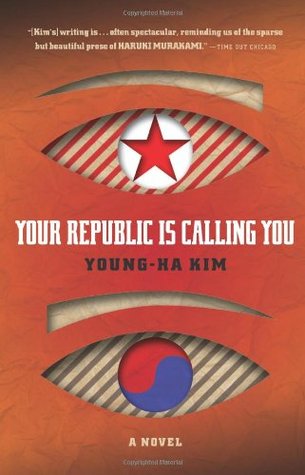 YOUR REPUBLIC IS CALLING YOU grabbed me with its unique premise. It's about a man named Ki-yong (weirdly called "Gi-yeong" in the book's blurb-- you'd think the transliteration would be consistent across the same edition, but no?) who is a securely middle class Korean man who works in the film industry. He's also a North Korean sleeper agent. One day, he receives a coded message informing him that his duties are over and that he must return home.

It's told through multiple POVs, all within a 24-hour period, so as Ki-yong tries to figure out what to do, we also see the story narrated from a coworker of Ki-young, his wife, Ma-ri, their young daughter, their daughter's teacher, and a couple others I forgot. There are a lot of moving pieces in this story and it ends up kind of being an interesting portrait of middle-class life in South Korea, in addition to being a sort of surreal spy thriller.

I liked the beginning a lot but I felt like it lost steam in the second half. I actually ended up skimming because I didn't really care about some of the POVs and they ended up feeling more like filler. I bought this copy for myself but it turns out I've also read another book by this author that I received as an ARC, which was called DIARY OF A MURDERER, and it shares some of the same problems I had with this book in that the author has some great ideas but sometimes he applies himself to them inconsistently, and they end up not really working out because things get either (1) too weird or (2) too boring. I guess I was hoping for more danger and suspense instead of a sort of Desperate Housewives situation with affairs and domestic drama.