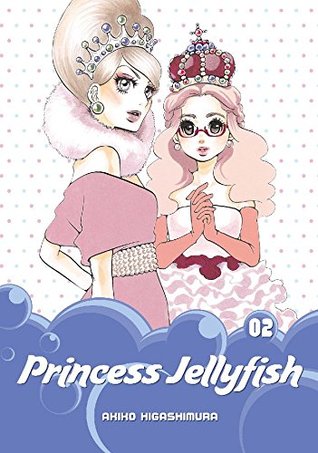 Right now, this whole series is available on Kindle Unlimited and I. Am. Obsessed. So, if you follow me for X type of book reviews, please excuse me while I proceed to blissfully geek out over manga for the next couple days, because I used to be TOTALLY into that.

Princess Jellyfish is so good. It's a josei manga, which means it's for older women, and even though the premise is kind of silly in that "in what world?" way that anime and manga can be, it isn't so off the wall that it feels like an Olympic shark-jumping competition. Basically, it's this slice-of-life comic set in this apartment complex where this group of otaku girls all live together. They call themselves "amars," or nuns, and their apartment is the nunnery. But developers want to bulldoze the place down and replace it with something else so they have to figure out a plan to save it. Also, the heroine, Tsukimi, finds out the gorgeous girl she had a run-in with is actually a rich boy in drag named Kuranosuke, only she might be in love with his older half brother, Shu. WHAT IS LIFE.

This is like one of maybe three books about nerdy girls that didn't make me want to throw my books out the window. In some ways it's like a better version of FANGIRL by Rainbow Rowell, because Cath was a raging twatwaffle on wheels who was portrayed as being morally in the right (even though she was basically the villain in her own story), these girls all end up undergoing pretty major character arcs. In the first books, they learn that they have allowed their interests to run their lives and basically turn them into selfish, antisocial people, and as the stories go on, they seem to be learning how to embrace their hobbies in healthier ways, while also socializing with one another and embracing team-work (but not at the cost of their true selves). It's surprisingly empowering and sweet, and watching the friendship between them all develop and grow is one of the best parts of the story for me.

The romance is a bit less compelling. Shu and Kuranosuke are both very flawed characters. Kuranosuke is more interesting because of his circumstances whereas Shu comes off as a bit more bland. I feel like that may end up becoming his character arc as well, perhaps similarly to the French film, The Closet; Shu thinks he has slept with a woman he hasn't (he's actually a thirty-year-old virgin) and his "prowess" frightens him and shames him, even as it raises him in the estimation of his womanizing father and makes Tsukimi jealous and conflicted. I'm curious to see what the author does with that.

If you're interested in slice-of-life manga-- especially those geared towards older audiences-- I think you'll really enjoy Princess Jellyfish. I find that I'm really enjoying it a lot.