My Last Summer with Cass by Mark Crilley 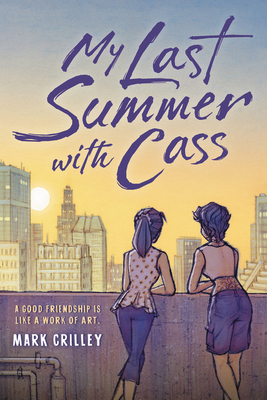 This is one of the best graphic novels I've read in a while. The whole time I was reading, I kept thinking about how much it felt like a movie, envisioning the soundtrack, mentally casting my favorite actors for the roles. The emotions, the story, the characters-- it was all so vivid and well done. Also, I loved the way the author wrote and drew the two female characters. Dude authors get a lot of criticism for the way they write women-- sometimes justifiably so-- but this was just a beautiful portrayal of two artists' coming of age and I loved it.

Told in three parts, it's about the friendship between Megan and Cass. Megan is kind of an obedient girly-girl and Cass is more of a rebellious tomboy but they are both aspiring artists who come from small Midwestern towns, reuniting every summer at a shared cabin in the woods because their parents are friends. In part two, they are both teens going off to college but Megan has the opportunity to stay with Cass in New York.

New York is a swoop of color and culture for Megan, who gets to experience art and life in a totally new way. This portion felt like a love letter to big cities, and to art, and how sometimes defining who we are as people means chipping away at uncomfortable boundaries and experiencing growing pains we might not be ready for. This proves to be the case for Megan, who ends up pushing herself too far and freaks out, resulting in a calamitous incident that might just be the end of her friendship with Cass forever. ...Or is it?

Seriously, this was such a beautiful graphic-novel and so life-affirming. It captures how I felt as a teen so well, and I think the author did a really fantastic job just letting his characters speak for themselves without any kind of authorly agenda. I hope this does end up as a movie one day because I would totally watch it. The ending moved me to tears because of how it brought everything back full circle. Anyone who loves art, big city life, and female friendships should read this book. It was so, so good.