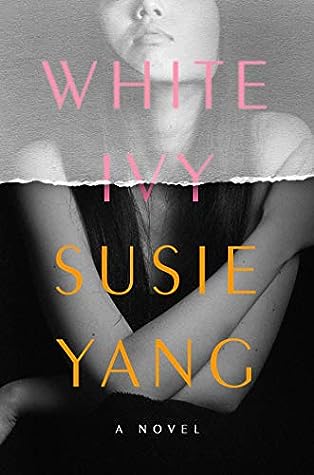 This was a wild rollercoaster of a book. Beautifully written, with rapturous highs and wilting lows, I found myself gulping down the sparkling prose like poisoned champagne and when it was all over, I listened to brooding indie rock for an hour because I was WRECKED and wanted to stew in my sad feelings like a piece of emo!lamb.

WHITE IVY is the saga of a Chinese-American girl named Ivy Lin. You can say a lot of things about Ivy-- that she's a sociopath, that she's a social-climber, that she's desperate, unhappy, and a sad shell of a human being-- but you can't tell me that she's boring. As a child, she shoplifts and is resentful of her poor-kid status at the elite school she attends only because her father is an employee. Her only real friend is a boy named Roux, whose mom is the mistress of a criminal boss. When Ivy is caught being with boys, she's sent to China as punishment, which ends up making her even more aware of class disparities and her hunger for wealth (like she can use it to fill the void inside her soul) and her desire to rebel against everything her parents want for her while also wanting approval and status herself, but on her own terms.

As an adult, Ivy catches the eye of her childhood crush, Gideon, the golden boy of East Coast wealth. And East Coast wealth is a whole other thing from West Coast wealth-- they're basically nobility once-removed. Finally, everything she's told herself she's wanted her whole life seems attainable-- but all of those golden dreams have a terrible shadow as memories from her past threaten to subsume her future and really push Ivy every extreme she possibly has as the reader wonders to themselves, "What won't this woman do?" Because this is literally like Mr. Ripley or Great Gatsby in how it examines the ease with which the rich gladly consume other people, metaphorically or, perhaps, less metaphorically.

Did I like the ending? NO. *Tame Impala intensifies* This is why we can't have nice things, okay? But I didn't really go into this expecting a romance. I think the best way to read this book, actually, is like a Patricia Highsmith novel. It's a deconstruction of the vapidity of the rich, the stratification of wealth, and the consequences of always looking past what you have for the next best thing. It's a brilliant case study of a truly troubled individual who is walking her own path of self-destruction to the sound of her own slowly detonating drum, not that the people around Ivy are much better. Sylvia? Gideon? Nan? Meifeng? They all have secrets; they all have something to hide.

As wrenching as this book was, I couldn't put it down. It's one of the best books I've read in a while and when I pestered the author on Twitter, I found out she's hard at work on her Next Book, which I will definitely be buying as soon as it comes out because this was just... *chef's kiss*

BRB, wallowing in the depths of despair.